City’s depleted squad came through the tough trip to Barrow unscathed with a 0-0 draw, meaning Matt Taylor’s side has still yet to find the net in the first six hours of the season. Alex Hartridge returned to the side following his spell out with Covid, and Taylor is set to welcome back Jonathan Grounds from suspension and hopefully Sam Nombe from his own Covid absence. Archie Collins, Jack Sparkes, Sam Stubbs and Josh Coley remain sidelined. 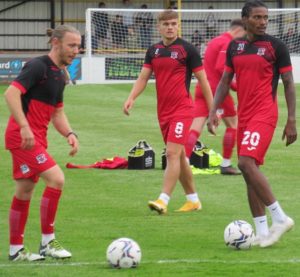 Having finished bottom of League One last season, Bristol Rovers have had a turbulent summer mostly involving their colourful manager Joey Barton, who has been involved in legal troubles that supporters have said have distracted the Gasheads from their rebuilding. Despite this they have been installed amongst the promotion favourites by most pundits, but Tuesday’s 1-0 win over troubled Oldham was their first after three successive defeats in league and cup. Barton saw a number of players leave during the break with only a few coming in, although these included the likes of Brett Pitman, whose experience should prove vital. Aaron Collins also arrived from Forest Green, he has always impressed in matches against City. Another player keen to make an impression will be Cameron Hargreaves – the son of journeyman midfielder Chris was released by City as a youngster but has sought to rebuild his career at Rovers.

The last meeting between the sides was in 2018/19, as City won 2-0 in the EFL Trophy through goals from Forte and Randall. The sides were last in the same division in 2015/16, a season when Bristol Rovers took four points on their way to promotion. The corresponding fixture finished 1-1, Sinclair scoring late on before Jamie Reid equalised in injury time. Rovers won the return 3-1, goals from Bodin, Brown and Matty Taylor sealing the points, Jake Taylor reducing the deficit to 2-1 early in the second half. That win gave Rovers the edge in league head to heads, 26 wins to City’s 25, 27 matches finishing level. Details of 28 recent games can be found at https://www.grecians.co.uk/wordpress/?p=11027

Chris Sarginson has taken charge of 21 Exeter games, those games can be viewed at https://www.grecians.co.uk/wordpress/?s=sarginson