City are waiting to hear if their application to change their name to “Exeter City Nil” will be approved after yet another 0-0 draw on Saturday, the fourth time in the last six matches and the third successive home match that this has happened. What’s more, Matt Taylor will be concerned that City failed to register a single shot on target which means that in the last two matches the goalkeeper was called into action just once. City now know that with three matches to go their fate is out of their own hands, and even three wins (which would mean needing to hit the target occasionally) may 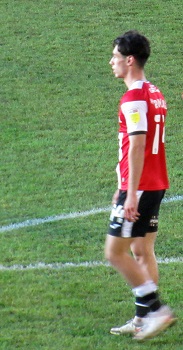 not be enough to gain a place in the playoffs. With Robbie Willmott available again Taylor may go back to the 4-4-2 formation, while although Joel Randall has made rapid progress from his hamstring injury it will almost certainly be too soon to see him back on the pitch.

Despite a shock 2-1 win over high-flying Bolton last Saturday, by Tuesday Grimsby looked doomed after a 3-0 thumping at home by Morecambe. However, their never-say-die attitude came to the fore once again on Saturday by coming from behind to win 2-1 and keep their hopes of staying up alive. It still looks a tall order, six points adrift of 22nd place Barrow with three games left, but there will be renewed energy ahead of the long trip on Tuesday. Back in December, the Mariners parted company with Ian Holloway and returned to an old favourite, Paul Hurst – who got the Mariners promoted back to the league in 2016. They lost eight of the first nine matches of his reign but have now lost just two of their last 12 (although seven of those finished as draws). Hurst was busy in the transfer window, signing a number of players including bringing Lenell John-Lewis back to the club. John-Lewis is joint top scorer, but as this is with three goals, that may explain why Grimsby are propping up the table.

When City visited Blundell Park in December an away win was expected with City rampant and Grimsby in freefall, and so it proved with a 4-1 thrashing. City led through Bowman, Hendrie equalised but by half time a Williams brace saw City lead 3-1, before Jay sealed the win in the second half. Last season’s match at the Park, however, proved to be City’s only home league defeat of the season as Grimsby raced into a 3-0 lead through a brace from Robson sandwiching a penalty from Ogbu, Bowman’s late goal a mere consolation. Grimsby have the slight edge in league head to heads with 13 wins to City’s 12, eight matches finishing level. 14 of the last encounters can be found at https://www.grecians.co.uk/wordpress/?p=9832

Just the two games in charge of Exeter for David Rock, listed at https://www.grecians.co.uk/wordpress/?s=David+rock