Having struggled for any sort of fluidity in recent games, City stunned leaders Cambridge on Saturday to record a 4-1 thrashing that not many would have predicted. What’s more, this came despite a couple of late emergencies with Robbie Willmott withdrawing on the eve of the match before Jokul Andresson was touch and go even in the warm up with a stomach bug. On the plus side Randell Williams made his first start of 2021 and looked lively for an hour, so will hope he is able to continue to play a key role in City’s playoff bid. Ryan Bowman’s goal will have boosted his confidence too. 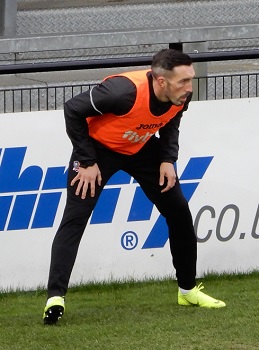 Barrow’s first season back in the league after nearly 50 years has been somewhat tumultuous, losing their manager to Bolton before the season then going through two more as they battled to avoid the drop. Interim manager Rob Kelly has overseen a rise in the side’s fortunes including a run of four straight wins (including away at Cheltenham) while they go into Tuesday’s match unbeaten in their last three following a 2-2 draw in a Cumbria derby against Carlisle on Saturday, which has left them six points clear of the drop with Southend only having five games remaining to close the gap. Scott Quigley has been vital to their fortunes with 12 goals, while Calvin Andrew has recently signed on a free transfer and adds a wealth of experience even if his appearances have only been off the bench so far. Another veteran, Jason Taylor, is likely to pull the strings from midfield.

With this match a rescheduled fixture after the postponement in January, this is the first clash between the sides this season and indeed since Barrow’s relegation season in 1971/72. City’s trip to Holker Street finished 0-0 before what turned out to be Barrow’s last league fixture for 48 years finished in a 7-1 thumping at the Park. With Barrow due to visit City on the last day of this season, they’ll be naturally hoping to be clear of the relegation zone by then just in case! The sides are, however, level in league head to heads with five wins apiece, while eight matches have finished level.

There are four games for Ross Joyce in charge of Exeter, they can be viewed at https://www.grecians.co.uk/wordpress/?s=ross+joyce