After an uninspiring performance in losing 2-0 at home to Morecambe on Tuesday night, what better way to get City’s season back on track than with a mammoth trip to a club that is almost invincible at home and but for a number of postponements would likely be top of the table. Injuries on the flanks haven’t helped as Matt Taylor seeks a winning formula, but the problems appear to be deeper than that – City have struggled to break down well-organised sides in recent games and have shown defensive frailties with simple long balls contributing to a number of goals conceded recently, including both on Tuesday. Alex Hartridge was forced off early with a head injury but, concussion protocols aside, should be fit to start on Saturday. Jake Taylor returned off the bench and may be considered for a return to the starting line-up as Taylor continues to rotate. 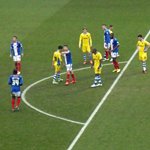 Carlisle could be forgiven for wondering if they’d complete a fixture again this season, as a combination of Covid, the weather and a power failure have conspired to ensure the Cumbrians haven’t finished a match since January 2nd. City will be hoping that this has led to ring-rustiness as no fixtures for four weeks will inevitably cause a drop in match fitness. Chris Beech’s side’s inactivity, at a time when they’d recorded five wins and a draw in their last seven fixtures, has seen them drop from first to sixth. Home form has been key to their success, with eight wins, one draw and one defeat so far, so City would do well to breach fortress Brunton Park. Top scorer is Jon Mellish, the defender turned midfielder, who has revelled in playing in a more advanced role and has 12 goals in all competitions, while Lewis Alessandria (six goals) is a familiar face in Devon. One player unlikely to feature is Brennan Dickenson, the wide man released by City in the summer made one substitute appearance before picking up a serious injury.

City have an excellent recent record against Carlisle, unbeaten in eight fixtures since a 2-3 reverse on the final day of the 2016/17 regular season that set up the epic playoff semi-final between the sides. It was a cagey affair at the Park in October, Tom Parkes scoring the only goal before Gime Toure saw red for reacting to what he saw as a deliberate stamp by Jake Taylor. City were triumphant in this fixture last season, goals from both Martins and Nicky Law, Olomola equalising for Carlisle, in a 3-1 victory. The recent good run has extended City’s league head to head lead with 26 wins to Carlisle’s 19, 17 matches finishing level. Game details of the last 32 encounters between the two clubs can be found at https://www.grecians.co.uk/wordpress/?p=10254

The officials for this match will be:-