After two cup matches gave Matt Taylor a chance to assess the quality of his squad, the league season begins in earnest on Saturday with a kind of symmetry. Saturday’s opponents, Salford City, were due to make their first ever trip to the Park back in March when the regular season was suspended, so it seems somewhat fitting that the resumption of the league should see this fixture take place. Despite eventually coming through to a 3-2 win against Forest Green in the EFL Trophy, Taylor wasn’t happy with the team’s start nor the softness of the goals conceded from set pieces, especially given the manager’s own pedigree as a player in those situations. Injuries to key personnel have handed opportunities to the 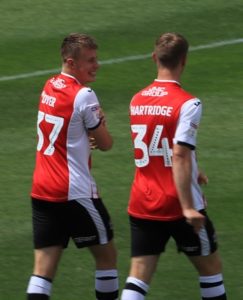 likes of Will Dean, Harry Kite, Jordan Dyer and Josh Key, the latter capping a fine display with his first goal for the club in scoring the winner against Forest Green, and some of the academy prospects will expect to feature on Saturday. One key decision will be who to play in goal, with both Ward and Maxted continuing to have a cigarette paper between them in terms of their value to the side.

Given the backing behind them, including several members of the “Class of 92”, Salford have been busy in the transfer market over the extended summer and have been installed amongst the favourites for promotion. Graham Alexander’s revolving door has seen players of proven pedigree come in, such as Tom Clarke from Preston, a pair of Ashleys (Eastham and Hunter) from Fleetwood and veteran striker Ian Henderson from Rochdale. The salary cap may inhibit further spending, however, hence perhaps why a number of players have also left the club. Adam Rooney remains, however, and he will look to improve on his slightly disappointing return in 19/20 where he failed to reach double figures.

Last season marked the first occasion the sides have met, hardly a surprise given Salford’s rapid rise from the depths of non-league. City made the trip north just before Christmas and emerged 1-0 winners thanks to a fine header from Ryan Bowman. The return, as already mentioned, was due to take place the very Saturday the league season was suspended.

This will be Samuel Barrot’s first season in the English Football League.