In the end a point was a good result against Walsall last weekend meaning City stretched their unbeaten run heading into the Christmas period, although the horror show of the first half hour of the match is something that doesn’t bear repeating. Matt Taylor is likely to be forced into at least one change – Dean Moxey’s 300th City appearance didn’t go 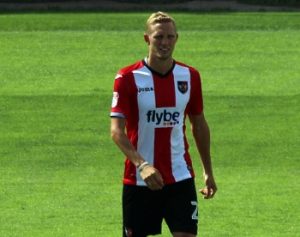 according to plan as he was injured early on, with Tom Parkes set to reclaim his place. Taylor may look to juggle his side around somewhat with the games coming thick and fast, so the likes of Jayden Richardson, Matt Jay and Ben Seymour could press for a start, while if Moxey isn’t fit enough even for the bench there could be room for Gary Warren, who has suffered a frustrating time with injury since signing for City in the summer. Nicky Ajose, another injury-hit summer signing, is rumoured to be given some game time having been on the bench for the last two matches.

In recent years Newport have established themselves as a formidable cup team which, last season at least, didn’t seem to detract from their league form. However, while once again the Exiles are still in the FA Cup and EFL Trophy heading into January, these runs plus a number of injuries have meant Michael Flynn’s side haven’t won in the league since mid-October. This poor run has seen Newport drop from the top of the division into mid-table, including picking up a solitary point from successive matches against the bottom two of Stevenage and Morecambe. Despite a forward line brimming with talent in the likes of Padraig Amond, Jamille Matt and former City loanee Tristan Abrahams, goals have been an issue with just 19 goals in 20 matches so far. Another former City player, Scot Bennett, has recently returned from injury and has appeared off the bench in the last couple of matches so will hope to start against the side where he began his career.

Boxing Day’s match marks the first “return” fixture of the season, the sides played out a 1-1 draw in Wales back in September. City led through Lee Martin but Abrahams levelled against his former club from the spot. There was another meeting, again at Rodney Parade, this time in the EFL Trophy in October, and which saw City win 2-0 through a brace from Matt Jay. Newport have the slight edge in league head to heads with four wins to City’s three, but people playing the Pools might put an X alongside this fixture as six matches have finished all square. The last 17 encounters (including the previous Newport) can be found at https://www.grecians.co.uk/wordpress/?p=9735

The match official for this game are:

Huxtable has taken charge of 11 Exeter City games, details of those games they can be found at https://www.grecians.co.uk/wordpress/?s=brett+huxtable