City’s promotion hopes took another nosedive on Saturday as another poor first half showing contributed towards a second successive defeat. However, there is no time for Matt Taylor’s side to lick its wounds as the fixture computer has thrown up a long away trip on a Tuesday night to a side that desperately needs a win to boost their survival hopes. Yet another name missing on Saturday was Pierce Sweeney, meaning skipper Jake Taylor is now the only ever-present member of the line-up. This meant a return for Aaron Martin, who capped his appearance with a goal, while Alex Hartridge made just his second start in league action. Taylor went with the wingback system that served him well at Lincoln but at Northampton it was deemed a failure, the side returning to a back four after half time, and it’s likely the latter formation will be utilised at Macclesfield. Hiram Boateng’s recovery continued with 45 minutes on Saturday and Taylor will need to make a decision as to whether he is good to start, which would likely mean Archie Collins steps aside, which would be harsh on the youngster.

It’s fair to say it has been something of a baptism of fire for Macclesfield on their return to the EFL after a six year absence, especially after losing manager John Askey during the summer to Shrewsbury. Mark Yates came in but couldn’t find a winning formula, so after having recorded just one win up to the middle of November Macclesfield went from tried and tested lower leaguer to an untried ex-England player in Sol Campbell. There was something of an immediate upturn, most notably in the game after Campbell was announced but before he had officially taken over – a shock 1-0 win at City. However, the Silkmen are now winless in their last seven meaning, accompanied by off-field problems with some wages unpaid in successive months, they are six points from safety going into Tuesday 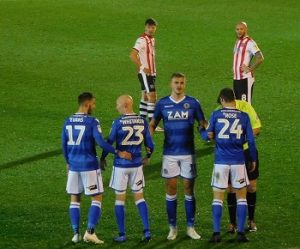 night’s match. Campbell rang the changes in Saturday’s 1-3 defeat to Paul Tisdale’s MK Dons, switching out no fewer than nine players, and the rotation may continue again. Like City Macclesfield have been finding scoring goals an issue (despite hiring Andrew Cole as a forwards coach), and will no doubt look to former Bristol City striker Scott Wilson, with 10 in all competitions, to provide the ammunition.

The reverse fixture was the aforementioned 1-0 defeat, with City perhaps accused of complacency against a side eager to impress their new manager – Harry Smith scoring the only goal early in the second half. City will be hoping their visit to Moss Rose will be as fruitful as their last, back in September 2008. Adam Stansfield scored in the opening minute, Ryan Harley doubled the lead only for Simon Yeo to pull one back on half time. Stansfield netted his second the other side of the break before Matt Gill continued a fine run of scoring to put an extra gloss on the scoreline late on, the match finishing 4-1. The sides are level in league head to heads with four wins apiece, five drawn, although Macclesfield have only won their home fixture once, back in 1999. Details of those 13 games can be found at http://www.grecians.co.uk/wordpress/?p=9890

The match official for the game are;