A soporific draw against a well-drilled Morecambe side was not the best tonic for having lost the talismanic Jayden Stockley (who was voted MOM on his Preston debut), and Matt Taylor has admitted to being frustrated in his attempts to bring in new faces ahead of a trip to a Newport side presumably still on Cloud Nine from having beaten Premier League

opposition in the FA Cup. One familiar face has returned, however, in Kane Wilson. The West Brom full back was on loan at Walsall in the first half of the season but has chosen to return to a club where he was perhaps under-utilised in his previous spell. With Pierce Sweeney looking bereft of confidence right now Wilson may expect to go straight into the side. Meanwhile Stockley’s replacement Ryan Bowman made his debut from the bench and will also be pushing for a start.

It is often said that cup runs can be a distraction from league form, and judging by Newport’s recent results, that is currently the situation in South Wales. Mike Flynn’s side has picked up a solitary point in the league since beating Northampton at the end of November, and ahead of the FA Cup 4th round trip to Middlesbrough Flynn will be desperately hoping to address that poor form which has seen Newport slip away from the playoff picture. Flynn has plenty of attacking options at his disposal, most notably the combination up front of Padraig Amond (17 goals in all competitions) and Jamille Matt (14). Also expected to feature is “one of our own” in Scot Bennett, 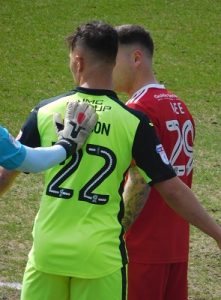 who has become a mainstay in the Newport side either in defence or as a defensive midfielder.

It was an early top of the table clash when the sides met at the Park in August, and the match finished all square – Stockley scored in the first half for City before Harris equalised late on. Newport got the upper hand on New Years Day 2018 the last time City made the trip – Amond gave the hosts the lead, Stockley equalised before Willmott scored the winner. The sides are level in league head to heads with three wins apiece, but with five draws this could be one to mark on your pools coupon. Details of the last 14 encounters (including the old Newport) can be found at http://www.grecians.co.uk/wordpress/?p=9735

Charles Breakspear has refereed 12 Exeter games, the most recent being the 1-0 defeat to MK Dons where he sent Dean Moxey off. Details of those game can be found at http://www.grecians.co.uk/wordpress/?s=breakspear