Rumour has it the referee on Saturday finally called a halt to proceedings just as the pubs were chucking out, although City know (and acknowledged by Matt Taylor) that they have to keep playing until the final whistle, no matter how late after the scheduled close it is blown. That said, a draw away at an in-form side continues City’s excellent recent form going into a 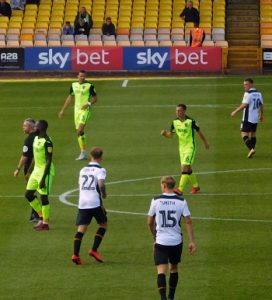 midweek match against another side that is finding its feet. City’s depleted back line saw Alex Hartridge recalled from his loan spell at Truro, and he was on the bench while Dara O’Shea and Archie Collins saw league action from the bench. The main consideration for Taylor will be whether to recall Jonathan Forte, who was left unused on Saturday after a busy week on his return from injury – with Lee Martin likely to make way should Forte return.

After a slow start, Stevenage under Dino Maamria have come into form of late, winning three and drawing one of their last four matches, culminating in a 1-0 win at Carlisle on Saturday that was unfortunately missed by supporters on their official coach, who were left stranded by road delays. All three of those wins were 1-0, in fact four of their five wins that leave them in fourth place in the table have been by that margin. With goals at a premium their top league scorer is Alex Revell with three, although Ben Kennedy’s goal at Carlisle 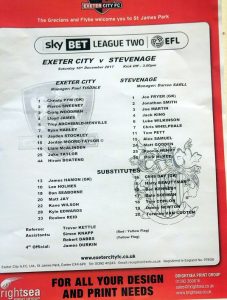 took him ahead overall with four.

It was that man Revell who proved the difference the last time the sides met at the end of last season at the Lamex Stadium as he netted a fine hat-trick in a 3-1 win marred by unsavoury scenes between City fans and management – Sweeney reduced the arrears from the spot. It was City who won the corresponding fixture, though, a 2-1 win with James and Sweeney on the mark for City, Matt Godden pulling one back late on. City have the league head to head edge with seven wins to Stevenage’s five, but draws are ahead with eight. Details of all 22 games between the two clubs can be found at http://www.grecians.co.uk/wordpress/?p=9507

Three games for Coggins in charge of Exeter, details can be found at http://www.grecians.co.uk/wordpress/?s=coggins