It seems that City are starting to revert to type, four home games without a win following Tuesday night’s 0-0 draw with Yeovil, at a time when Paul Tisdale’s side has resurrected its away form. So perhaps it’s a good thing that City now embark on a long away trip on Saturday to face a side that is hovering close to the drop. With Jordan Moore-Taylor out

and no timescale yet given on his likely return, the last thing City supporters will have wanted to see was Troy Brown playing the second half on Tuesday with heavy strapping on his leg, it’s hoped that was just a precaution and Brown can take the field on Saturday, otherwise his namesake Archibald-Henville or Dan Seaborne, or possibly youngster Jordan Storey or even Luke Croll could deputise. Kane Wilson is available again and he will fight Pierce Sweeney for the right back slot. Elsewhere Ryan Harley’s ineffective performance on a pitch ill-suited to his talents may see him drop to the bench in favour of Lloyd James or Kyle Edwards, while Matt Jay and Liam McAlinden will also battle for a start alongside Jayden Stockley.

With rumours of off-field problems still bubbling under the surface, Morecambe are looking nervously over their shoulder in 22nd place on the pitch. Save for a stunning 4-2 win at promotion chasing Wycombe the Shrimps have found wins hard to come by, becoming something of draw specialists with five draws in their last nine matches. Given their issues off the pitch and rumoured to be the smallest budget in the division, if manager Jim Bentley keeps them up he should be in the running for manager of the year. Key to their survival hopes will be Kevin Ellison, who celebrated his 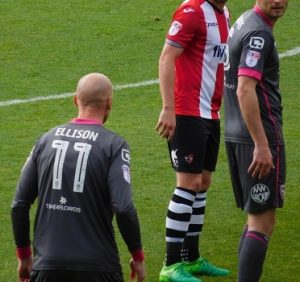 39th birthday with a double in that win at Wycombe. Others to watch include Adam McGurk, while veteran goalkeeper Barry Roche has clocked up nearly 400 league appearances for Morecambe (scoring once!).

Morecambe have tended to be one of City’s favoured opponents, with three straight wins in this fixture and an unbeaten run stretching back eight matches, the last defeat being back in August 2013. The reverse fixture saw City dish out a 4-1 thrashing – City went 2-0 up through Brown and Stockley, Oliver pulled one back but it was 3-1 by half time thanks to another from Stockley. Dean Moxey scored his first goal since returning to the club early in the second half but try as they might City couldn’t extend their lead yet further. The margin of victory was the same in last season’s fixture at the Globe Arena, as City raced to a 3-0 lead in the first half (Wheeler, Grant and Holmes) before effectively declaring at half time. City have a substantial lead in league head to heads with nine victories to Morecambe’s three, although there have also been 10 draws in this fixture.

A full head to head of games with Morecambe can be found at http://www.grecians.co.uk/wordpress/?p=9082

Carl has refereed 7 Exeter games going back to 2002 and a defeat away to Wrexham. Details can be found at http://www.grecians.co.uk/wordpress/?s=boyeson