Having rested a number of regular first teamers for the Checkatrade Trophy match at Plymouth and seen those who did take the field come away unscathed, there will be something of a sense of relief for Paul Tisdale as he selects his squad to make the mammoth trek to Carlisle on Saturday. Jordan Tillson limped off against Morecambe and is likely to miss 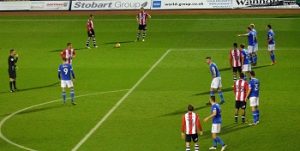 out, opening the door for a first league start in City colours for Hiram Boateng. Lee Holmes missed both matches in the past week and should he continue to be sidelined Dean Moxey is likely to once again fill in, having scored on his first start back at City – in something of a symmetry his last start at home for City was also against Morecambe in 2009, where he scored (and was booked)! Competition also comes in the face of Kyle Edwards, who again impressed and scored a fine goal in the draw with Plymouth.

Unlike City, Carlisle haven’t yet made much of an impression following their defeat in the playoffs last season, leading to vultures circling around manager Keith Curle. That said, having pointed to City’s faith in Tisdale last season, his side responded by thumping Crewe 5-0 away and were also victorious last weekend at Crawley before a defeat to Leicester U21s in the Checkatrade Trophy in midweek. Home form has been a bit of a problem for Curle’s side with just one win so far back in August. With Jabo Ibehre having left for Cambridge in the summer a lot has fallen on the shoulders of Hallam Hope and Reggie Lambe, both of whom have four goals, while Nicky Adams in midfield pulls the strings. 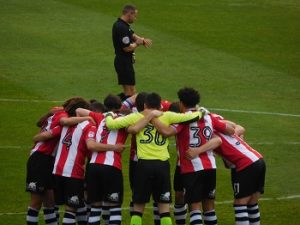 before City went through to Wembley by virtue of the same scoreline after a 3-3 draw at Brunton Park. The corresponding league fixture last season was arguably the catalyst for City’s success, when a last gasp 3-2 win for the hosts saw City drop to the bottom. City have since picked up 80 points in 40 league games across last season and this, with the 3-2 reverse at home on the final day of last season an aberration that saw the Cumbrians clinch their playoff place. City hold a slight head to head lead in league fixtures with 23 wins to Carlisle’s 19 (16 draws).

Eddie has refereed two Exeter games, the most recent being the home defeat to Newport County in April. Details of his Exeter match can be found at http://www.grecians.co.uk/wordpress/?s=ilderton