Exeter City FC have announced that Season tickets for 2017/18 will be available for collection from Tuesday 4, July 2017 at 10am. Anyone who chose collection as an option can come to reception during normal opening hours (9am to 5pm, Monday to Friday) and pick up their season ticket pack for next 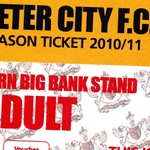 With no home friendly game announced, collection options for those living away from Exeter are limited, but should be okay to be collected on the opening game of the season against Cambridge United.

For those that chose the postal options these season tickets will be packaged and sent out between the July 12 and July 17, so they arrive in plenty of time for the first home game on August 5.

The deadline for holding seats for existing season ticket holders expired on June 30 so those seats that have not renewed will be made available from Tuesday, July 4 at 10am.

Previous: Ethan Ampadu signs for Chelsea
Next: EFL Live TV games for the start of the season