Yet another late show against Morecambe secured a vital three points for City and ensured that one win from the final two matches will secure, subject to a most unrealistic scoreline, an extension to the season for Paul Tisdale’s side. Reuben Reid picked up a knock having come off the bench to score the decisive second goal and will be closely 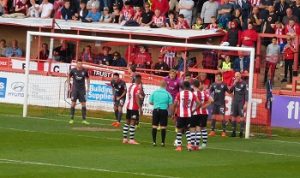 monitored, perhaps starting from the bench again. There is good news elsewhere with Craig Woodman close to a return from his broken arm and Matt Oakley likely to return to the bench having missed the last two matches. Lee Holmes is pressing for a start too but Joel Grant did his chances of selection no harm against Morecambe.

Promotion has been sealed already for City’s hosts, but Doncaster have been reeled in somewhat by Plymouth and Portsmouth in their quest for the title after successive defeats. Darren Ferguson will therefore be aiming to get his side back on track on Saturday in a fixture that could clinch the trophy. Doncaster have been free-scoring this season and it will be vital to keep 26-goal top scorer John Marquis quiet. However, City attention will also be on former star James Coppinger, whose performances at the tender age of 35 have been every bit as classy as they were when Copps was wowing City supporters more than a decade ago.

The reverse fixture saw City upsetting the odds to take the lead through Reid, before Liam Mandeville and a brace from John Marquis sealed a comeback. Saturday marks City’s fist visit to the Keepmoat, the last trip to Doncaster was to the old Belle Vue ground in August 1997 where City emerged triumphant against a beleaguered Donny side 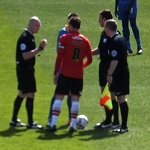 destined for relegation with what was at the time described as one of the most one-sided 1-0 wins you’re ever likely to see. City legend Darran Rowbotham bagged the only goal of the game. The overall Football League head to head sees Doncaster in the lead with 22 wins to City’s 16, and just five draws.

The match officials that have been appointed for this game are:-