Exeter City are delighted to announce that Thatchers Cider have renewed their sponsorship of the big bank at St James Park for a further two years.

Thatchers, a fourth generation cider-maker, based at Myrtle Farm in Somerset have enjoyed a fruitful relationship with Exeter City for a number of years. As a family run cider-maker, with strong values of heritage, community and family, Thatchers instantly recognised the same values within Exeter City. This makes for a great partnership between both organisations, who work together to the benefit of local charities and fundraising initiatives.

Thatchers have often gone the extra-mile to support the club, its fans and the local community. Last season they covering the cost of fans travel to Anfield on Grecian Travel for the FA Cup third round replay against Liverpool, after being stunned by the incredible support of the fans on the Big Bank throughout the thrilling ninety minutes. Thatchers have donated match sponsorships to the ‘Dream-A-Way’ charity in the past, enabling the event to be used for fundraising by the charity, or as a much deserved break for those who help the charity the most.

We have made many good friends within Exeter City. It is therefore a pleasure to continue 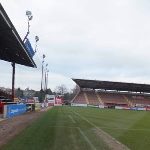 our support of the Club, fans and the local community. Both the Club and ourselves share a strong ethos of community – we have been very pleased to support fundraising initiatives such as Dream-A-Way which has been able to make a big difference to those who need it most.

The Big Bank at St James Park, built in 2000, is the largest standing terrace in English League Football with a capacity of 3,971. Being behind the home goal, it offers an ideal view of goalmouth action and has a reputation for being the loudest at St James Park.

The club is delighted that Thatchers have extended their sponsorship at St James Park, they are a delight to deal with and we are proud to have them as club partners. Thatchers have supported us in really positive ways ever since we started our partnership, they genuinely understand the football world and the benefits of working with the Club.