With City’s EFL Cup adventure coming to an end against a very professional Hull side, it’s back to league action on Saturday with the visit of a club that a few years previously would have only been in similar circumstances. Paul Tisdale 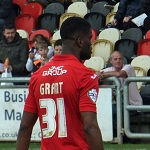 will hope to have no new injury concerns although Ryan Harley’s withdrawal on Tuesday was thought to be the result of a knock so he will be monitored closely. Bobby Olejnik will expect to return to the side alongside the likes of Jordan Moore-Taylor, while Tuesday saw welcome returns for Joel Grant and David Wheeler. Lee Holmes is thought to still be a few weeks from a return, while Ollie Watkins was only fit enough for the bench and will hope to be fit enough to start.

As usual Portsmouth have been made amongst the bookies’ favourites to start moving back up the leagues, but Paul Cook’s side made a slow start before, like City, recording their first league victory of the season last weekend against relegated Colchester. Cook will have enjoyed the benefit of a week off after that win as they lost in Extra Time to Coventry in the first round of the EFL Cup. Unlike City Pompey have only suffered one defeat, a 2-0 reverse at the division’s early surprise package in Morecambe. Given the resources available to Cook he has been busy in the summer transfer market with signings including impressive right back Drew Talbot and the ex-Middlesbrough striker Curtis Main. Gary Roberts remains a class act at this level and scored both goals in that win over Colchester. City enjoyed the upper hand last season in three matches between the sides with two wins, one in the JPT, and one draw. The corresponding fixture last season was that draw – Portsmouth led 1-0 through Chaplin before a 90th minute equaliser from Ollie Watkins which kick-started his amazing run of form. The reverse fixture saw City go 2-0 up through Wheeler and Davies before Roberts pulled one back late on. City have yet to lose at home to Portsmouth since their sudden drop to the fourth tier, although all three matches have finished 1-1. Portsmouth enjoy a comfortable Football League head to head lead with 11 wins to City’s three (8 draws).

Gavin Ward has taken charge of 11 games featuring Exeter City, they can be found at www.grecians.co.uk/wordpress/?s=gavin+ward