With City’s cup adventure over and done with a couple of months later than usual, focus turns to the last 20 league fixtures and the hopes that Paul Tisdale can mastermind a promotion push, starting with a tricky match against one of the division’s surprise packages. There was a massive David Noble-shaped hole in the City line-up at 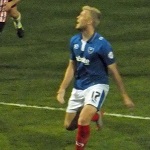 Liverpool, and supporters will be hoping this was a minor setback and that the midfielder is fit to return on Saturday. David Wheeler did make a return off the bench and will hope to have put his injury woes behind him, while Tom Nichols and the cup-tied Jayden Stockley will look to resume what looked a deadly partnership in last week’s win at Leyton Orient.

As always when the pundits and supporters examined the runners and riders in League Two during the summer, one name tipped to struggle was Accrington – a club that gets crowds hovering just into (and occasionally below) four figures could surely not survive at this level. However, time and time again Stanley confound the pundits and this season is no exception as John Coleman, a manager who may not be everyone’s cup of tea but who certainly knows how to get results, has put together a side that is currently handily placed to launch a promotion challenge. With games in hand due to a pitch once again unable to handle more than a sprinkling of rain Stanley sit in 6th place in the table, a position cemented on Tuesday night with a 3-1 win over Hartlepool in their first home fixture since mid-November. Key to their success has been Josh “Son of Dean” Windass who has 11 goals in all competitions although his impending

departure, along with Matt Crooks, to Rangers in the summer has been a source of some acrimony. Another player to watch is Billy Kee, once a target for City, who has 10 goals so far in a side that knows how to find the net.

There were goals aplenty in the reverse fixture, as Windass (2), Mingoia and Kee put the hosts 4-0 up, a scoreline that was given a veneer of respectability by late goals from Holmes and Grant, both notching their first for City. Last season at the Park it was a familiar home woe tale for City with a 2-1 defeat – having led through Nichols before being pegged back by McCarten and a 90th minute winner from Aldred. City hold a slight lead in the head-to-heads with 8 wins in league fixtures to Accrington’s 6, just one match ending in a draw.

Previous: Orient Sack Hendon After Defeat to Exeter
Next: Jake Taylor Returns on a Permanent Deal