The FA and the television companies have decided which games will be televised live from the first round replays and the second round ties. 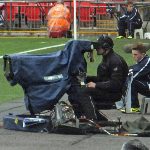 First up are the first round replays. Two games are being shown:-

The winners of the League 1 side (Bradford City) versus the Conference side Aldershot will be at home to Chesham United in round 2.

Exeter City at St James Park await the winner of the second televised game between Maidenhead of the Conference South and Port Vale of League 1.

The live televised games for round 2 have also been chosen. Unsurprisingly the BBC have again returned to Salford for their game on Friday night choosing their game at home to League 2 side Hartlepool United.  Like Exeter, Hartlepool will be reminded of their exit to a non league side live on TV, Pools losing to Blyth Spartans.

For the Sunday game, BT Sport have ignored a number of potential giant-killing acts by non league teams and have gone for a Lancashire derby game.

Second round TV ties to be shown live are as follows:-

Broadcasting fees for the second round rise to £72,000 for each of the six clubs.

All the clubs that win their second round tie will receive £27,000 in prize money from the FA.

Previous: Match Officials: Exeter City vs Crawley Town
Next: Next Up: Exeter vs Crawley