Supporters of Yeovil Town, Hereford United and Exeter City are being invited to wear their football shirt to work on Monday (10th August) and raise funds for the Adam Stansfield Foundation.

Monday represents 5 years since the passing of Adam Stansfield after succumbing to bowel cancer. Fans will be taking part in a minute’s applause before Exeter take on Yeovil Town on Saturday. There will also be a supporters match at Topsham Town FC in the morning between Exeter and Yeovil fans. 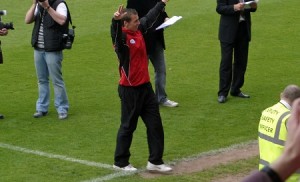 The Adam Stansfield Foundation was set up in his name, to raise awareness of bowel cancer in the young and help promote a healthy lifestyle through football continues to work hard to achieve its aims.

Since theAS9 Foundation began they have helped over 5000 children through supporting PowerChair football in Devon, Downs Syndrome football in Devon, FA Junior Football Leaders Awards in Devon, Somerset and Herefordshire. They’ve also supported over 100 junior football teams in all of the three counties Adam played in.

The foundation in the last 5 years have had many supporters who have challenged themselves with marathons, half marathons, swims, walks, football matches, bike rides and ultra-marathons. Some people have organised quizzes, parties, dances, dinners and auctions to raise funds. Others have donated items for auction and money from personal events. They’re always humbled by what our friends, family and supporters do in Adam’s name and are always very grateful.

The foundation has also worked very closely with Exeter City Football in the Community facilitating many courses for disabled and special needs children. They’ve also worked with Yeovil Town Community Sports Trust who have run FA Leaders Awards for them. they’ll  continue to work closely with both clubs in the future helping youngsters get on the first rung of the coaching ladder and working with disabled and special needs groups. Hereford FC will be remembering Adam at their match on August 1st versus Hull U18’s and members of the family will be there to represent the Foundation.

More on the Adam Stansfield Foundation can be found at http://www.adamstansfieldfoundation.com/