The Club have announced that they have signed 23-year-old Tom McCready on contract terms until the end of the season.

The midfielder was released by Everton in 2009 as a 18-year-old having not played first team football. He was then signed by Hibs in Scotland, but didn’t feature in first team football for them either. He went on to play 2 games for Altrincham in the Conference, and then signed for Chester FC, where he got a serious knee injury on his debut against Harrogate Railway Athletic. He played four games for Chester and had a short spell on loan for Airbus in the Welsh League.

He then went to the USA on a scholarship and represented Limestone College in South Carolina. On return to England, he went on trial with his older brother Chris’s club Morecambe. Tom signed on non contract terms for the Shrimpers and played in 7 games for Morecambe, including featuring in Exeter’s 2-0 win at the Globe Arena last October.

Tom wasn’t kept on by Morecambe, and has been on trial with the Grecians at the Cat & Fiddle since last month. 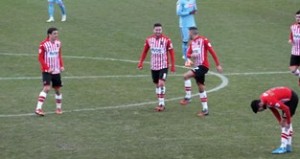