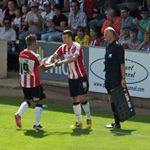 Exeter City this afternoon announced their released players, with goalkeeper Artur Krysiak and playmaker Alan Gow on the list.

Forwards Sam Parkin, John O’Flynn and Elliott Chamberlain, along with youngsters Jacob Jagger Cane and Jake Wannell, are the other players not to have their contracts renewed by City boss Paul Tisdale.

Krysiak said farewell to Exewebbers yesterday afternoon and the departure of the 24 year-old, who spent four years at the club, was confirmed this morning. The Polish stopper arrived at St James’ Park on a free transfer from Birmingham in 2010 and was initially back-up to Paul Jones, but soon made the number one spot his own.

in January in a temporary swap deal for Eliot Richards. Despite the Gas suffering relegation last week, the 31 year-old has been offered a deal by Rovers providing he can prove his fitness, with Richards expected to join City on a permanent deal.

Irishman John O’Flynn joined in 2010 from Barnet and scored 23 goals in 122 league games. A move back to former club Cork City, where he enjoyed a prolific spell before moving to England, is reportedly on the cards.

Journeyman forward Sam Parkin made the move down south from Scottish side St Mirren last summer. After initially impressing for the Grecians – heading home a late winner on the opening day against Bristol Rovers – the former Swindon Town man ended the campaign with a paltry tally of three league goals.

Elliott Chamberlain had been the 1931 funded player for the past two seasons but failed to break into the first team. The Welsh under-21 international spent two spells on loan at Bath City during his time with City.

Youth products Jacob Jagger-Cane and Jake Wannell have also been released by Exeter. Jagger-Cane was given a pro deal in April 2012 and spent time on loan on Poole and Weymouth, whilst Wannell had a loan spell at Chippenham in 2013 alongside Jordan Tillson.

Exeweb would like to wish all seven players well for the future.