The Grecians travelled to Staffordshire for a League 2 game against Burton Albion. Without a win in 2014, so far, City needed to build on the 0-0 achieved against Oxford United earlier in the week. John O’Flynn started ahead of Tom Nichols. O’Flynn had the ball in the back of the net twice with one ruled out for a foul and the other for being offside, plus he thinks he deserved a penalty just before half time.

For the 3rd time this season, the opposition scored for the Grecians. Making 3 out of 3 own goals so far in 2014. McGurk quickly equalising for Burton Albion, and 1-1 it remained.

Portsmouth are the next team for City to face. Will Exeter City get their first win of 2014?

Paul Tisdale’s commented to the press:-

I’m very pleased with the way we played. It was a very committed performance, and I felt that we shared the energy out and every player contributed. It was a team performance and we thoroughly 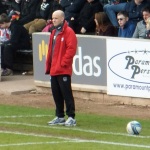 deserved a draw out of the game.

I said to them again afterwards that we’re having to work very hard for our points, but there’ll come a point when we work that hard and things start to fall for us a bit more.

We little bit more patience maybe around the last third, but that’s what you get off the back of a long run without winning too many games.

I hope I’m not looking through rose-tinted glasses, but I think we shaded the flow of the game with our play around the pitch and we were a touch quicker to the ball.

It was a game that either team could have won – at one-all, as a manager you’re wondering whether to stick or twist. They made a few changes, and I stuck with the 11 – they were tired but they were doing the business.

I haven’t seen a performance where our front players put as much pressure on their defence as we did today. That’s not just John O’Flynn and Jimmy Keohane – that includes Arron Davies and Liam Sercombe. They were exceptional as a group.There are lots of things that show optimism going into this really big couple of months for us.

Tis just gave basic instructions to go out and look after the ball, to be strong and to work our socks off. I think Jimmy and I did that – it’s nice to have Jimmy around me with a bit of energy helping as well.  I think the whole team had great energy today – it’s enjoyable to play in an energetic and youthful team.

We’re reaping the benefits of working hard on the training ground.  We’ve got our heads down in the last few weeks, and I think the energy we’re showing is great.  The fans must have appreciated that today – we’re trying to get as many points for them as we are for us.

I thought I was onside for my header, but the linesman said I was a fraction of. And I thought I could have had a penalty just before half-time – anywhere else on the pitch, that’s a free-kick. The ball bounced and I got my body in, and the defender came over the top of me with his elbow into the back of my neck.  It wasn’t given which is unfortunate.

Gary Rowlett said after the match:-

I think the way we played you would have to say it was a point gained. That was probably the poorest we’ve played all season – we just didn’t get going.

I thought we played into Exeter’s hands first half. Everything was in front of them, neat and tidy and nicey, nicey. The last thing I said before the game was that I didn’t want the game to be nice.

The conditions were poor, the pitch wasn’t great and I felt we took too long to get the ball forward. To get it back to 1-1, you start to think we can go again but I suppose we were quite happy with a point in the end.

I said about three weeks ago we’ve been good in most games and have not been bettered by other teams. But I think Fleetwood edged us and I would say Exeter were slightly better over the 90 minutes.