On a chilly night in front of a near empty stadium in Buckinghamshire, justice prevailed as City earned a late point against a

Wycombe side for whom the word “cynical” was an understatement. There were three changes from the side that lost 3-1 at Rochdale on Saturday, with places for Butterfield, Wheeler and Grimes. Scot Bennett started at the back ahead of the benched Pat Baldwin. So, the line-up in full: Krysiak in goal, full-backs Butterfield and Woodman, Coles and Bennett at centre back; A midfield trio of Sercombe, Gill and Grimes, with Gow on the left and Wheeler on the right supporting John O’Flynn up front. The bench comprised Pym, Baldwin, Davies, Doherty, Nichols, Keohane and Parkin.

The early exchanges were cagey as both sides sought to establish themselves, but as is often the case when a side is out of

form, luck wasn’t on City’s side as Wycombe took the lead in the 9th minute. The diminuitive Josh Scowen was allowed to make a surging run towards the box, Matt Gill crucially slipping as Scowen shot. The effort seemed to be coming to nothing until it struck his team-mate Steven Craig and nestled in the far corner of the net from the despairing Krysiak.

What then followed set the tone from the match, as it became obvious that Wycombe would stop at nothing to kill the game with a cynical approach that angered the vocal away support. The goalkeeper, Ingram, at one point took over 20 seconds to release the ball from his hands, players were diving about all over the place and feigning injury, and

woe betide if any home player broke out into a brisk walk when retrieving the ball for throw-ins. City’s best play stemmed mainly down the flanks with Gow looking majestic and Wheeler battling hard, but any time City looked like creating something the final ball would be overhit, or a Wycombe body would get in the way, while Wycombe looked to build through Scowen or former City trialist Dean Morgan, also without success bar another deflected effort from distance that Krysiak did well to parry away.

The referee, Mr Linington, wasn’t helping matters by failing to get a grip on the obvious gamesmanship emanating from the Chairboys, and he stood idly by as a brawl ensued after Sercombe was practically thrown off the pitch into the visiting dugout.

Inevitably there were cries of “Sub the ref!” and “You don’t know what you’re doing!” as he seemed to allow Wycombe to bring the game thoroughly into disrepute with their antics.

City’s best move of the half came late on – Liam Sercombe had started poorly but perhaps in reaction to the aforementioned brawl had found an extra gear, and he showed grim determination to beat three men as he raced into the box, only for a last-ditch challenge to block him off. The half time whistle, after only three minutes of added time (your correspondent counted seven minutes at least that should have been added on), was greeted with a chorus of boos for the referee. Incredibly it was Ainsworth who was in the referee’s face as the teams walked off – what he had to complain about nobody knows.

Into the second half and City started to grow a bit in energy level, if still exhibiting signs of a side woefully short of confidence. Once again Mr Linington blotted his copybook with the visitors – Sercombe hacked down by an awful two-footed lunge by Scowen. As the visiting supporters confidently chanted “Cheerio!” only a yellow card was forthcoming. Incredible. The referee was feeble to in still failing to take hold of Wycombe’s gamesmanship – they really upped the ante, first of all giant defender Stewart went down, apparently dead. As he left the pitch and was made to walk back round to the halfway line, as he passed the away supporters he broke into a sprint, laughing at the baying crowd as he sprinted past. Stuart Lewis, after a BAFTA-worthy dive in front of the away supporters, looked up and flashed a grin. He knew what he had done, we knew what he had done, the man in black was

conned yet again. On another occasion Sam Wood watched the ball roll gently past him twice as he waited to take a throw in. When they did try to play they came close to a second, Butterfield heading off the line.

In amongst all this City were becoming really fired up, epitomised by Sercombe, and made a couple of changes – Parkin replaced the ineffectual O’Flynn and was immediately more than a handful, while Davies’ introduction in place of Wheeler was met with some furrowed brows, but he too added an injection of energy. At this time City pushed Scot Bennett up front, playing with effectively a back two as Craig Woodman was almost an auxiliary winger. City pressed and pressed without forcing a clear opportunity as Wycombe defended for their lives, but with seven minutes left on the clock City’s dominance was finally rewarded. Matt Gill’s long throw-in wasn’t cleared. Bennett tried to turn and shoot, the ball scooting forward to Gow who tried exactly the same with more success – the ball nestling in the

corner to send the visiting support delirious. From the kick off City pressed again but this time the ball was deflected out for a corner. Wycombe were stung into life, suddenly they were all fully fit, Wood going from watching the ball trickle past him to leaping over the hoardings to retrieve the ball. Funny that. The game was there for the taking and both sides were going at it, Krysiak being called into action to save routinely on three or four occasions, while Arron Davies found only the side netting with a fierce effort.

There was a further scare as a move down Wycombe’s right culminated in an effort blazed across goal, and in the last seconds of the five added minutes City had a free kick from near halfway that came to nothing, and that was that.

This point will have done wonders for City’s confidence. The performance in the first half especially lacked confidence and was disjointed, but City grew as the game went on. Faced with an ultra-cynical Wycombe side they kept going and were

rewarded with the outstanding Gow’s equaliser. There were barely 2,000 home fans inside Adams Park, and on this evidence one can see why. If you thought the NYD 2013 Wycombe were cynical, this side was even more so, egged on by their manager who earned the rebuke “Your team are a disgrace to Football” from your correspondent as he left the field again in the referee’s ear. That they could get away with it was down to a referee who had a shocker. Clearly anxious to avoid much paperwork he was a spare part mostly, occasionally feebly waving a hand to tell Wycombe players to get on with it, and stopping play frequently as Wycombe players perfected their Dying Swan act with impunity. When City had a free kick he’d let Wycombe players stand well within ten yards, he was conned by play-acting on numerous occasions, and how Scowen stayed on the pitch following his assault on Sercombe nobody knows.

Anyway, onwards and upwards, starting with the visit of Bury on Saturday! 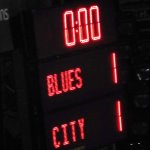 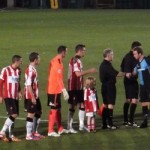 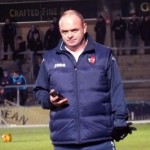 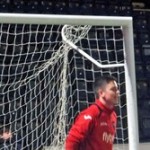 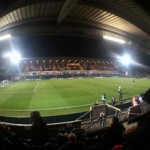 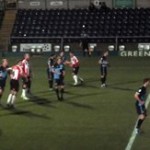 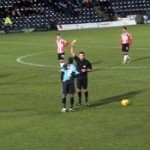 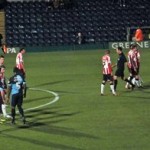 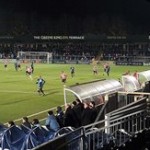 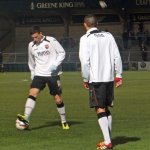 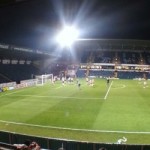 Previous: Tisdale on Draw with Wycombe: “They wanted it so much today”
Next: Under 21s to Host Blackburn Rovers in Premier League Cup