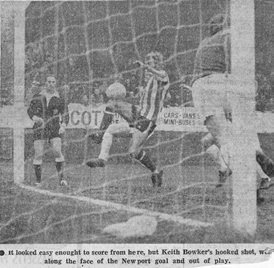 After missing chances early on, City hit back confidently and never looked in danger of dropping any points.

Although there were signs of fog, the visibility presented no problems whatsoever – and it was Exeter who looked the more aggressive side in the opening minutes. They forced a corner from the right, and from it, Bowker had a clear shooting opportunity. His shot was beaten out for another corner, but Newport cleared.

Newport exposed Exeter in midfield with a quick move and from it Godfrey broke clear, but pushed

the ball just too far in front and Key was able to stop the danger. Then the big Aizlewood came up for a free kick, but he put the ball straight at Key.

Still, Exeter were having virtually all the game, but were not capitalising on on this territorial advantage.

The deadlock was broken after 36 minutes – and it was Exeter that went ahead with a superbly executed goal. The move was built up down the right and all credit to TEMPLEMAN who scored. He kept moving forward after a fine overlapping run and took a pass from Bowker to score with a strong angled shot as he cut in from the right.

Exeter immediately went at Newport at the start of the second half. Saxton made a good break from defence and when he crossed Bowker did well turn but was then beaten by numbers. A superb run by Jennings down the left exposed Newport but when it was crossed, Morrin was penalised well inside the visitors’ area.

The attendance of 3,447 was nearly 5,000 down on the mid week match against Torquay.

City were still on top, and they went further ahead in the 55th minute with a goal that would please any manager. Robertson, from the middle of the park, played the ball wide to Jennings on the left. The little winger hit a perfect cross to the far post where BOWKER moved in to score with a header.

Godfrey tried a 25-yard shot which Key was able to deal with easily, and still Exeter were having much more of the game. Newport had a chance of pulling one back when, following a good move down the left

. White crossed to the far post where Woods had a free header, but he put it over the bar.

Saxton needed treatment after he had himself committed a foul – and ironically it led to Exeter’s third goal. Newport’s free kick was blocked; Wingate hot a long ball and then JENNINGS took off on a superb 50 yards solo run to outstrip the Newport defenders and tuck the ball into the net for a truly magnificent goal.