In a contest of two sides hopelessly out of form, it was honours even in a pulsating match in horrid conditions – although a point was no good for either side in their respective end of season battles.

Paul Tisdale, as is his wont, sprung a huge surprise with his line-up in giving a start to young Jamie Reid in an ambitious 4-3-3 setup. Steve Tully returned to the side despite a broken toe, requiring injections to do so. So, the team was: Krysiak in goal; a back four of Tully, Woodman, Coles and Baldwin; the three in midfield were Doherty, D’Ath and Davies, with Reid, Cureton and O’Flynn up front. There was a massive boost too with Alan Gow considered fit enough for the bench, where he was alongside Evans, Bennett, Moore-Taylor,

Dawson, Molesley and Chamberlain – so surprisingly no place for Anton Rodgers, reportedly one of the brighter players in the defeat at Rotherham.

With a pitch resembling the Copacabana aside from a swamp in the centre circle, and an opposition that bordered on towering (midfielder Harry Pell is so tall he breathes a different kind of air to us mere mortals), it was clear that this was going to be more blood and thunder than tiki taka, and Wimbledon attempted to exploit City’s recent early vulnerability by forcing a couple of corners and testing the visiting defence

with teasing high balls into the box. However, City settled into the game and the first opportunity of the game came when Jamie Cureton had a shot that Sullivan in the home goal perhaps made more of than he should have done – although it would have looked good for the cameras. Jamie Reid then had a similar effort that Sullivan palmed away, and when John O’Flynn attempted to put the ball back in there were strong shouts for a penalty for handball.

With both sides keen to get forward as much as possible, it was City who broke the deadlock on 36 minutes in a magnificent sweeping counter-attack. The ball was lumped up to O’Flynn. He laid it back to Cureton near the halfway line on the right,

and Cureton with one touch spread the play out to Reid on the left. Reid ran at the defence and fired a shot that looked fairly comfortable despite a slight deflection, but Sullivan could only help it on its way to give Reid his first senior goal and send the 800+ City supporters delirious.

Artur Krysiak in the City goal remains an enigma – capable of the most outrageous bits of goalkeeping at either end of the good/bad spectrum, and almost straight from the restart he showed this in spades. First the bad – the ball was passed back to him, but he lost concentration and the ball passed under his foot, fortunately the right side of the post. From the resulting corner he then pulled off an outstanding save to deny Mitchel-King an equaliser.

With City in front at half-time, Tisdale decided to alter his side’s shape by bringing off the ineffective O’Flynn and

replacing him with Scot Bennett. Bennett was involved in the move early in the second half that almost saw City double their advantage – Arron Davies was released down the left. With a deft turn he plonked both defender and goalkeeper on their backsides, only to be denied by a magnificent goal-line clearance. At the other end Krysiak was forced to pull off a memorable fingertip save.

Wimbledon made their intentions clear by bringing on a striker (the lightening quick Strutton) for defender Mitchel-King, and two minutes later they were level. A throw-in was only half-cleared to Luke Moore 25 yards out, and somehow his shot evaded the crowd of players in the box to nestle in the net.

Undeterred, City went back up the other end and scored – Reid was played in down the inside right channel and, belying his inexperience he fired a first time shot into the far corner.

This time it was the Dons who were undeterred, and their second equaliser was a carbon copy of the first. Throw-in finds its way to Luke Moore on the edge of the box, bang, into the corner of the net.

The mad five minutes or so was almost completed by another goal – Strutton was released down the right and his afterburners took him clear of the City defence, only for Krysiak to stand up well to parry his effort away and eventually clutch the rebound.

With ten minutes to go, one of the biggest cheers of the day greeted a City substitition. Not for the replacement of Lawson

D’Ath, who was industrious throughout, but for the introduction of the mercurial Alan Gow. With his first touch he sprayed a delightful ball to the wing, the cross came over and Jamie Cureton, about a foot shorter than the defenders around him, rose highest to head a looping header that Sullivan did really well to parry.

A minute later City thought they had gone ahead again. That man Reid had a shot from the inside left channel which the keeper looked to have covered but for Cureton’s intervention – it’s not clear whether he touched the ball but the flag went up. As long as he was in an offside position, even if he didn’t touch the ball he was clearly interfering with play so the decision was sadly correct.

Another chance for City came as Gow blazed over as he ghosted into the box, but the last five minutes or so were all Wimbledon, and a combination of good last-ditch defending and solid keeping kept the scores level before the referee blew his whistle to end the contest.

Overall a draw was a fair, but unwanted, result for both sides in a match you could tell both teams desperately wanted to win. The conditions may have been dreadful which meant the passing was of the longer variety in general, but this really only aided the match as a spectacle in front of AFC Wimbledon’s record crowd.

City were generally industrious, with the midfield trio (first half) and quartet (second half) working particularly hard in the middle, but the MOM had to be young Jamie Reid. Aside from two well-taken goals, he used the ball well and caused the Wimbledon defence a lot of problems with his direct running, to the extent they tried (largely unsuccessfully) to bully him with some physical play.

It’s still all to play for therefore with two crunch games coming up! 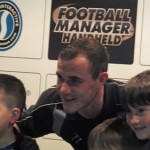 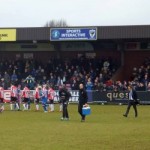 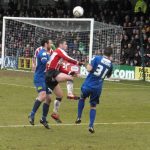 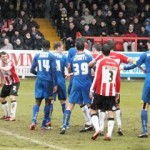 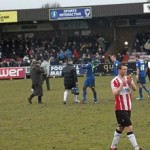 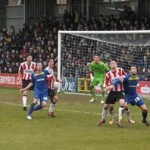 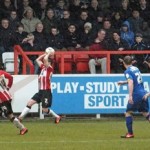 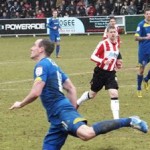 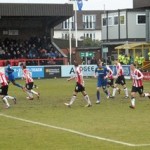 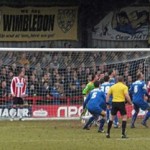 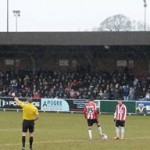 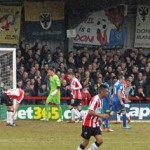 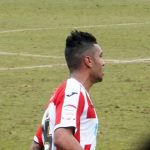 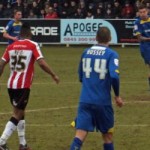