We’re into mid-September, and City are still yet to play a team that we didn’t cross swords with in our non-league days. Saturday will be no different as we welcome York City to The Park. Jamie Cureton limped off towards the end of the thrilling 4-2 win at Oxford last week but is expected to be fit, however Alan Gow remains a bigger doubt for Saturday. If he is still sidelined John O’Flynn is ready to resume a striking partnership that put up a consummate display at the Kassam Stadium.

It took a while, 8 years in fact, but York are back in the Football League where they belong. Under the stewardship of ex-Tamworth boss Gary Mills the Minstermen triumphed 2-1 over Luton at Wembley in May to seal their return. Like City they lost on the first day of the new season, but have since performed well to lie in the playoff places. Their last fixture saw them draw 2-2 with pre-season fancied club Chesterfield. Their main goal threats will be Michael Coulson (4 goals so far this season), Ashley Chambers (3) and Jason Walker (2), while City fans will be sure to give Jon Challinor a warm reception should he make it onto the pitch – all four of his appearances so far this season have come from the bench, but no doubt he will be keen to remind the City faithful of why he was a crowd favourite during his spell in Devon. Someone who is unlikely to make the trip but will be remembered fondly in any case is York’s Academy boss, none other than legendary defender from the 89/90 title romp, Richard Dryden.

City just enjoy the better of the head-to-head record, with 21 wins to York’s 17 and 6 draws, but it’s the North Yorkshire side who have had the better of things recently, undefeated in the last six meetings between the sides. The last time the sides met was in the glorious 07/08 season, with both games televised by Setanta (the home tie attracting the then record viewing figures for the channel, beating out Old Firm matches). The viewing public were treated to a 1-1 draw in August (watch the 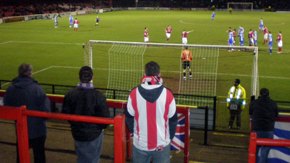 goals here), Onome Sodje’s late goal cancelling out Richard Logan’s first half penalty, before the return saw York edge out City 3-2, Woolford and Parsloe putting York 2-0 up, Steve Basham pulling one back only for Sodje again to score, before Logan’s late goal set up a tense finale.

With City scoring for fun and York looking a good bet for a solid season, this promises to be a cracker.

The official view from the Minstermen, can be read here.

Previous: Rotherham’s Evans Hit with 6 Match stadium Ban
Next: Next Up: Wycombe Wanderers at Home