A new season, and before a ball is kicked in anger the first round of the FA Cup will be played. Though it is not called the first round at this point, but rather than the imaginatively named Extra Preliminary round. Plenty of games to be played before we find out who will be Exeter City’s opponents in round 1.

The FA have been particularly unhelpful to Devon clubs, with only Plymouth Parkway being drawn at home. Details:

Of those ties, I think Elmore has the most meaning for Exeter City fans, because of the connection with Adam Stansfield.

Other ties of interest in this round is Alvechurch away to Norton United. For the author, this was his first game that he saw that the Grecians were indeed not invincible, losing 1-0 after spurning a number of chances. This being November 1973.

Two phoenix clubs have been drawn to play each other. Spennymoor Town (reformed in 2005) at home 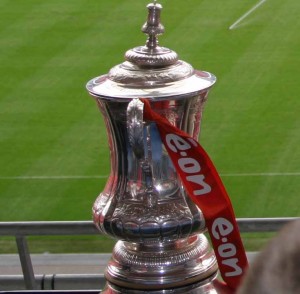 to Scarborough Athletic (who were reformed in 2007).

No place for the new Darlington club, as they hadn’t been formed by the FADeadline.

One tie to take note of is Wembley FC at home to Langford. An example of the FAallowing the sponsors to dictate stuff. Terry Venables is now Director of Football, and they will have a special veterans team of former stars to play in the FA Cup, replacing many of the normal team players.

The full draw for this round can be found here.

The dates of the all the rounds prior to the 1st round proper, and how this fits in with Exeter City games is as follows:

Will you be gong to any of the games? Would love to have a match report for Exeweb from you if you’re interested.