Paul Tisdale was able to immediately banish any thoughts of the Manager of the Month curse (the last City manager to win the award was out of the job four months later) with his City side strolling to a 3-1 win at Forest Green on Saturday to go three points clear at the top of the table. One possible selection

issue concerns Liam McAlinden, who limped off on Saturday, but Tisdale is hopeful that he’ll be fit to play on Tuesday night, with club record signing Jayden Stockley waiting in the wings should McAlinden not recover in time. Otherwise it’s likely to be as you were, with the other summer signings also needing to be patient.

Barnet were installed amongst the strugglers by the experts, especially after a lacklustre pre-season, but successive wins have left the Bees in a strong 7th position so far, and their three wins have come against fancied opposition in Luton, Swindon and, on Saturday, Cambridge. It’s not every club whose manager’s background is in Rhythmic Gymnastics, but Rossi Eames earned plaudits during a caretaker spell last season and was given the job on a permanent basis in the summer. Talismanic striker John Akinde hasn’t yet played 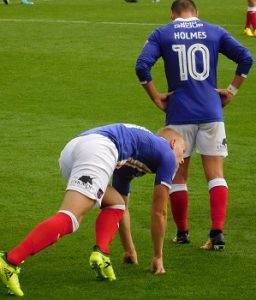 this season due to injury, but new signing Shaquille Coulthirst has found his shooting boots with four goals (including a hat-trick at Swindon) in his last two games, while the likes of Jamal Campbell-Ryce have plenty of pedigree at this level.

City enjoyed the best of this fixture last season, picking up all six points on offer. The corresponding fixture saw struggling City go to The Hive and emerge comprehensive 4-1 winners after going behind through Akinde, City roared back with goals from Taylor, Holmes, Wheeler and Reuben Reid opening his City account from the spot. The return at The Park saw City race into a 2-0 lead through Moore-Taylor and Wheeler before that man Akinde reduced the arrears in the second half. City have the overall league head to head lead with 11 wins to Barnet’s seven (10 draws).

Graham has refereed six City games, details can be found at http://www.grecians.co.uk/wordpress/?s=horwood