denzel said:
Looking forward to us being featured above Argyle as Devon's premier team on Spotlight..........
Click to expand...

It will feature just after the article about hell freezing over and the exclusive about bears not defecating in forested areas.

Grecian Max said:
MT has been open with the fact he's after someone of a different profile - those lads mentioned have a big part to play, but we will need that extra signing I think, particularly up against teams where we aren't dictating the pace of the game.
Click to expand...

Need extra signings as we are a bit thin on the ground - injuries to Nombe or Brown OR both will be a real problem unless we send Jamal up front when his ankle is fixed !
S

Always a bit difficult comparing like with like as until 1958/9 the third tier had North and South Divisions.

At the moment (such early days) there are 20 (PL) + 24 (Championship) + 1 (L1 leaders) above us. So we are 46th. But of course this is not an end of season comparison. Someone with more time might do a season by season check on in season league placings to absolutely establish the answer to Szi’s question.

Totally agree and the team that pipped us to promotion Brentford went to further success and within a few seasons were playing in the old First Division.

I have often wondered whether given that it was more of a level playing field in those days had we been promoted instead of them with the team we had we might well have had the same success and totally changed the course of the Club’s history.

jambo said:
Think the yellow was for kicking the ball away.

(the tackle was outstanding, btw - as was his recovery tackle when Hartridge was caught dawdling in possession)
Click to expand...

That tackle was a key moment in the game Vale would probably have gone on and scored and taken the lead there….the outcome of the game could well have been very different.
K 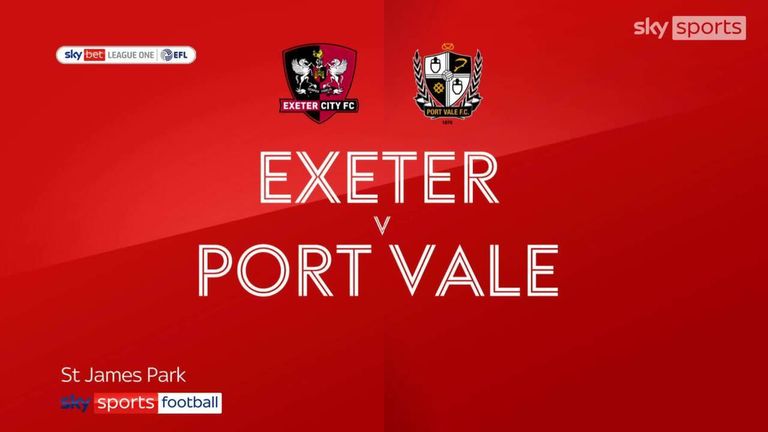 Highlights of the Sky Bet League One match between Exeter and Port Vale.

Great that MT points out that there aren't many clubs playing 6 academy graduates at one time - makes me proud.
Also interesting that he said to Greeno that he probably won't see it again !
UTC & Up the Academy

antman said:
No doubt that Kite looks like another yet another amazing prospect but in a game where we have to work much harder out of possession we are still need of a defensive midfielder of quality in my opinion. Sounds like Kegs has been brought in with that role in mind.
Click to expand...

We don't need a defensive midfielder, we play five at the back, it's just not how we play.

Grecian in Guzz said:
Great that MT points out that there aren't many clubs playing 6 academy graduates at one time - makes me proud.
Also interesting that he said to Greeno that he probably won't see it again !
UTC & Up the Academy
Click to expand...

Location
Still haven't found what I am looking for......

Highlights of the Sky Bet League One match between Exeter and Port Vale.

How good was the strike for the first goal. Great technique from Kite!
G

Red & White said:
How good was the strike for the first goal. Great technique from Kite!
Click to expand...