Colesman Ballz said:
Does Aaron getting "the hook" signal another spell in the "boon docks" for him, I wonder ?
Click to expand...

I reckon so. He was at fault for one of the goals and made some misjudgements in the second half. Many around me couldn't beleive that straight swap of Arron Martin for Parkes when we're 2-1 down but I understood Taylors thinking and Parkes literally didn't put a foot wrong once he came on. Winning the first ball puts you on the ascendancy, whilst scrapping for and winning the second ball means the opposition have already reshaped and the counter is all but done.

Sparkes was quality in the second half, he isn't a full back and wing back restricts him too much, he needs to play as an attacking player, his delivery from out wide is exceptional at times. If he plays in a more advanced role he will create chances each and every game. He put three or four cracking crosses in during the second half today.

I thought we played well and even if we had lost 2 - 1 I would have clapped the lads off.

Fisher did well when he come, the Bowman - Fisher partnership is a decent one to have up our sleeve, both are big and relatively mobile.

Leyton Orient were a bunch of &^%s, their number 21 (Marsh on loan from Spurs) was an absolute disgrace.

I'm not convinced Martin will start on Tuesday however the reason he went off today was because Moxey went to full back to push Sparkes on, perfectly understandable.

Who were the planks that chose the MoM today? I'll admit to missing the first half hour because I was late getting away from work and understand that Randall Williams had a good first twenty minutes but whilst I was there he did bugger all apart from everything I've moaned about him previously (not getting crosses in, slowing down attacks because he's checking back onto his stronger left foot etc, etc) yet Jack Sparkes provided and energy going forward, got his crosses in and defended well when he had to and should have easily been Man of the Match but somehow, seemingly based on the opening twenty minutes or so, Randall Williams gets it.

DB9 said:
Going 2-1 down was totally our fault, Started the 2nd half too slowly and their equaliser just before halftime sent them in with a spring in their step and we didn't get on top of that and ended up chasing the whole second half
Click to expand...

Agree completely.....everyone blaming the ref and the Leyton Orient tactics for not winning are well wide of the mark....as MT said we were collectively not good enough today and particularly lacking in the final third!!

Sparkes was great today, particularly in the second half. He'll turn out to be a real asset for us. Moxey was also class again. At centre half he's arguably our best player and reads the game brilliantly. Law was relatively quiet, as was Bowman, and for the first time this season I detected some anxiety in Wards play.

I've just watched the goals again, how can anyone blame Aaron Martin for the first goal today ?? If anything Sweeney was picking their striker up.

Also to blame him for the second is harsh, he tried to block it and deflected it, it happens.

He does appear to be a bit of a scapegoat, I actually thought he had a decent game. 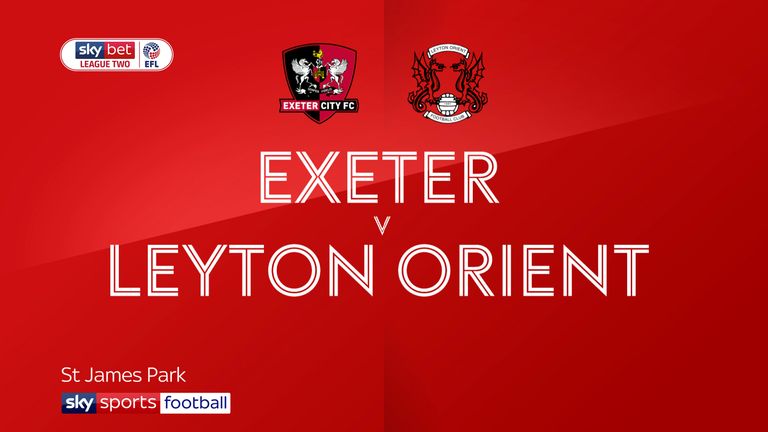 Highlights of the Sky Bet League Two match between Exeter and Leyton Orient.

The Proper Chap said:
I've just watched the goals again, how can anyone blame Aaron Martin for the first goal today ?? If anything Sweeney was picking their striker up.

Also to blame him for the second is harsh, he tried to block it and deflected it, it happens.

He does appear to be a bit of a scapegoat, I actually thought he had a decent game.
Click to expand...

Totally agree, both goals we conceded today I thought he weren't to blame either and yeah I thought he played well. Ref ruined the game second half with shocking decisions. 2 of their players should have been sent off. It was as if the ref felt threatened by Orients management team. Sparkes was my MOM today. That ball from Sparkes was class into the box when Bowman got soft contact with the ball which when straight at the keeper (if bowman heads that it's in) brilliant second half from him. Great balls into the box and I like the way he takes players on. The pen was a pen even if it was soft. We deserved 3 points today but was happy to get 1 in the end. Like I've said before still unbeaton and still top. Onwards and upwards roll on Tuesday!

Sexton Blake said:
That is a ludicrous comment it was right in front of us.....close but the ball was not out of play.
Click to expand...