A lot can happen when there’s a week off, especially during the January transfer window, and City’s squad will have something of a new look about it when they take the field following their enforced layoff. Two key players in City’s promotion have swapped League One for a relegation battle in the basement as Matt Jay and Tim Dieng have departed for Colchester and Gillingham respectively. In so far have come loanee Joe White from Newcastle and the returning Josh Coley, recalled from his loan at Harrogate. With Jay and Dieng having been mainly bench warmers under Gary Caldwell, it may mean little disruption to the starting line-up, while Sam Stubbs returned to the bench in the 1-0 win at Oxford albeit with the proviso that he wouldn’t be featuring that day – it may be that he is in line for some minutes on Saturday if not yet ready to start. 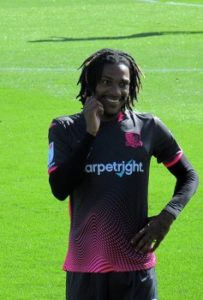 After a turbulent summer that saw their manager and several key players depart (plus talisman striker Matt Stevens out injured long term), it’s perhaps no surprise that while the other three promoted teams have done well, Forest Green have struggled and currently prop up the League One table following four straight defeats. With their FA Cup match against Birmingham rescheduled for Tuesday night it may be that Ian Burchnall could look ahead to that fixture, although he is likely to feel that league survival trumps cup fortune. Stevens has made a gradual return to the side in recent games and may be ready for a start, but City supporters hoping to see former skipper Jordan Moore-Taylor in action are likely to be disappointed as he has been out for over a month. Goals at either end have been an issue for the vegans so far, exacerbated by the departure of top scorer Connor Wickham following the expiry of his short-term contract. Amongst the plethora of new signings made in January by Burchnall, hopes of an added attacking threat rest with Jordan Garrick, although he only netted once on loan at Lincoln in the first half of the season.

The Sky TV cameras captured the full glory of City’s 4-0 trouncing of Forest Green at the New Lawn back in September – Nombe opened the scoring before Jevani Brown took over against his former club, netting a hat-trick. There was revenge of a sort in the EFL Trophy when a City side with an average age of about 12 lost 4-1, while the last meeting at the Park finished 0-0. City have a strong league head to head lead with nine wins to Forest Green’s two, but Pools players may look to this fixture as ten have finished level.

David Rock last refereed Exeter City in the FA Cup tie last season against Cambridge Utd. He riled an offside goal as onside and post match apologised for his mistake. Cambridge won the tie and were rewarded with a tie against Newcastle United.