The absence of Pierce Sweeney was felt especially in the first half of the 2-0 defeat at Bolton last week as the defence looked particularly vulnerable – thankfully an improvement in the second half kept the score down but Gary Caldwell will want a lot more from his side going into the Christmas period without Sweeney’s presence. Caldwell may decide to retain the same back three as at Bolton, although Jonathan Grounds’ shaky performance may mean he is left out with either Josh Key or Tim Dieng set to slot in. Elsewhere there is brighter news in the shape of Sonny Cox, who made his return from a groin injury in the FA Youth Cup defeat to Oxford, and may be considered for a place on the bench. 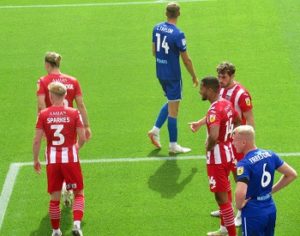 Following a 2-0 home defeat to relegation-threatened MK Dons last week, it’s fair to say the vultures have begun to circle Fratton Park and the future of the Cowleys – expected to challenge at the top, Portsmouth currently find themselves in 10th place having failed to record a league victory since a 1-0 win at Forest Green in October – in sharp contrast to Pompey’s cup form which has seen them line up a lucrative trip to Tottenham in the FA Cup 3rd round. With 13 goals in all competitions, Colby Bishop is the main goal threat following his summer move from Accrington. Dane Scarlett, on loan from Tottenham, is highly thought of in North London although he has yet to really kick in with three league goals to his name. There is quality throughout the side, however, as befits one of the “giants” in the division and their purchasing power.

Since their four season stay in the basement, Portsmouth have come up against City twice in the EFL Trophy, both times coming back from 2-1 down in the dying seconds to win 3-2, so City will have to be on their guard even if leading when the fourth official’s board goes up. The last league meetings took place in 2016/17, where the visitors won 1-0 on both occasions. The corresponding fixture took place when City couldn’t buy a win at home, Gary Roberts’ late penalty sealing the points, but it was a different City that went to Fratton Park and won 1-0 through David Wheeler. That win was just City’s fourth over Pompey, who have 12 wins in league fixtures, eight matches finishing level.

The last time that we saw Robert Lewis refereeing an Exeter game was in August when City lost 1-0 to Cheltenham.