City were denied what would have been a sensational but deserved victory against Sheffield Wednesday thanks to a 94th minute equaliser, but with the tricky run of games continuing apace the recent improvement in performances will have given Gary Caldwell’s side a lot of heart going into Saturday’s trip to the North West. While Josh Key picked up his fifth booking of the season in that 1-1 draw, one of his yellow cards came in the EFL Trophy, and therefore he is expected to continue back in his familiar wing back role with Jake Caprice, scorer of City’s goal, continuing on the left. Elsewhere Kegs Chauke 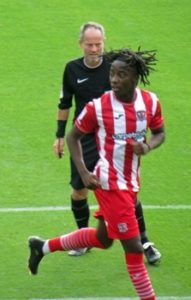 took advantage of Harry Kite having to miss out with illness to turn in a stylish performance on his full league debut and will hope he has done enough to retain his place, while Sonny Cox is thought to be the closest of the injured players to a return albeit not just yet.

Another of the “fallen giants” currently slumming it in League One (having dropped even further recently), Bolton are naturally one of the favourites to go up and have put themselves in a strong position in 5th place, although there is a considerable gap between them and the top three, and patchy recent form hasn’t helped the cause of Ian Evatt’s side. Unlike City Bolton were in action in midweek, trouncing Manchester United’s youngsters 4-0 in the EFL Trophy, although it remains to be seen how much the exertions from that match will have taken out of them come Saturday. The main goal threat comes in the form of Dion Charles, who has scored six in the league (nine overall), but there is a wealth of pedigree running through the side.

Bolton’s stay in League Two was a short one, the Trotters securing an immediate return to the third tier in 20/21, but City spoilt the promotion party by winning this fixture 2-1, Jones gave the hosts the lead only for Williams and a late Sweeney goal to ensure Bolton had to wait another week to celebrate. The return fixture at the Park had finished 1-1, City led through a Santos OG before Gnahoua equalised for the visitors. Bolton lead the league head to heads with five wins to City’s three, four matches finishing level.

Scott last refereed an Exeter City game in September 2021 which Exeter won 2-0. unusually there were no yellow or red cards shown in that game.