City earned their share of the plaudits for what was a classic Devon Derby, but the fact remains three of City’s last five league matches, and four of the last six overall, have seen four goals conceded – a state of affairs that cannot continue if City are to maintain their impressive start to the season. Attention turns now to the FA Cup which has handed City another away trip to a fellow League One side in Port Vale. Gary Caldwell left the returning Cheick Diabate on the bench on Monday night, but he may now return to the starting line-up which would free up Josh Key to move forward to his favoured wing-back position. Elsewhere Caldwell packed his midfield to decent effect by replacing Jevani Brown with Tim Dieng in the “10” position and bringing in Harry Kite, whose effervescent performance alongside 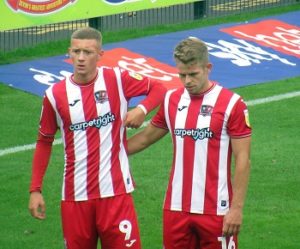 Archie Collins in midfield won’t have gone unnoticed in terms of starting places on Saturday.

Port Vale, like City back in the third tier following promotion last season, struggled at the start of the season (including a 4-0 hammering at the Park), but Darrell Clarke’s side has improved with just one defeat to Ipswich in their last seven matches in all competitions. Following a 2-2 draw at Wycombe on Tuesday night the Valiants moved above City into 10th. Ellis Harrison looks to be the chief goal threat with seven goals in 14 league appearances, while James Wilson has the pedigree of being ex-Man United to draw on.

The sides have met already this season in that aforementioned 4-0 drubbing back at the start of the season – Kite’s stunner will live long in the memory and remains a front-runner for the goal of the season, but these were added to by a brace from Jevani Brown (one from the spot) and Sam Nombe. There have been two previous FA Cup encounters involving City and Port Vale – most recently in the 2nd round in December 2015 when League Two City beat League One Vale 2-0 through Tillson and someone called Ollie Watkins (remember him?) to set up a 3rd round tie against Liverpool. The previous one was in 1952/53 at Vale Park, which the hosts won 2-1.

We last saw Simon Mather at Northampton in the 1-1 draw in our last away game in L2 in April.

Interviews with Gary Caldwell and Harry Kite can be seen below