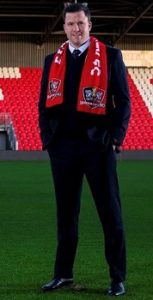 Sam Nombe’s birthday present to himself was to score a dramatic later winner against Fleetwood to end the recent rot of three 4-goal defeats in all competitions and, with the managerial appointment of Gary Caldwell to take the team into a properly mouth-watering trip on Tuesday night. Cheick Diabate made his return to the side a couple of weeks ahead of schedule then promptly limped off late on, so it remains to be seen if this was just precautionary or whether he will miss out on Tuesday. Back into the side, however, will come Pierce Sweeney following his suspension, while Tim Dieng came off the bench and will be pressing for a start. One name that has been noticeably absent from the matchday squads even when City couldn’t field a full bench was Harry Smith, who has decided to cut short his loan and return to Leyton Orient having failed to settle in Devon.

No club has epitomised the term “crisis club” like Derby in the past couple of years, but under new ownership and after a brave relegation battle where the Rams almost escaped the drop from the Championship despite a 21 point deduction, there’s a feeling of a new dawn in the east midlands. With Wayne Rooney having departed for the US, Liam Rosenior was given the mammoth task of rebuilding the squad – and he did this with 11 new signings and five loanees – before promptly being sacked, leading indirectly to City’s own managerial travails as Derby appointed Rotherham’s Paul Warne who in turn appointed Matt Taylor. As one might expect with practically a new squad in place Derby’s results have been a bit up and down, and in fact they go into Tuesday night’s match behind City in the table albeit with two games in hand on their hosts. Among the signings have been players with a host of higher level experience such as Tom Barkhuizen, Conor Hourihane, David McGoldrick and James Collins, and it is the latter who leads the scoring charts with four to his name so far.

Given the difference in stature of both sides, while Derby have been in the third tier before, this coincided with City being in the basement, and therefore Tuesday night is the first league meeting between the sides. The only fixtures have been in cup matches, the sides having met in a two-legged League Cup tie in the 1993/94 season, Derby winning both legs – although Derby played a significant role in City’s past history as they were one of the sides knocked out on City’s march to the 1930/31 FA Cup quarter final.

This Adam Herczeg’s début season in the Football League, so hasn’t refereed Exeter before.