Although it was essentially a youth team plus a couple of seniors that took the field in the EFL Trophy against a far more experienced Forest Green side, a third successive 4-goal defeat will have done nothing for City’s confidence and, with a new appointment hopefully set to take place before the weekend, whoever is in charge will have to cope with the continued defensive woes which were added to by Pierce Sweeney picking up his fifth league booking of the season which means he misses out on Saturday. Harry Kite took no part on Tuesday night, presumably a precautionary measure as he is likely to be needed in defence again against Fleetwood, while Josh Key will also again likely deputise 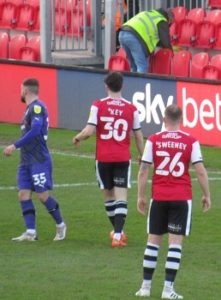 should the likes of Jonathan Grounds still not be back to fitness. Otherwise young Ed James, who made his league debut as a substitute last week and played the full 90 on Tuesday, could step in again. Tim Dieng made a welcome return in the first half on Tuesday, and he may return to the starting line up, probably in place of Rekeem Harper.

Having narrowly avoided relegation last season, Fleetwood turned to Celtic legend Scott Brown to bring about an improvement in their fortunes – his first task was probably to make the Cod Army difficult to beat and he has certainly achieved that, with just three wins and three defeats as Fleetwood have become draw specialists with seven. True to form Fleetwood drew on Tuesday night in the EFL Trophy with Manchester United’s youngsters (indeed, all three of their matches in that competition finished level!). Two of their three league wins, it should be said, have come against that lot down the A38 and Peterborough, two of the highly fancied teams in the division. Finding someone to score goals has been a key issue for Fleetwood so far this season, with Dan Batty the only player to have netted twice in the league, while 25 players have already been used as Brown looks to find his best side.

Although Fleetwood were very much a side on the up in the two seasons they and City were in League Two together while City were, in 2013/14 at least, floundering near the foot of the table, that season saw City take six points from this fixture. The corresponding match saw City coast to a 3-0 win, an Own Goal from “The Beast” Jon Parkin followed by a double from Elliot Richards sealed the points, while Matty Blair’s 71st minute opener was wiped out by a Scot Bennett double in the 76th and 79th minutes at Highbury. With both matches finishing level in the previous season, City go into Saturday’s match unbeaten in this fixture.

Tom Nield last refereed an Exeter game was at Carlisle in April which City won 1-0.