City’s defensive availability appears to have now been exposed with successive games seeing the formerly solid City defence shipping four goals, this time to the hitherto lowest scorers in the division. With interviews for the next City manager taking place this week Kevin Nicholson will need to address this new frailty in what will be the last match of his audition for the role. However, his job has been made even harder by Pierce Sweeney picking up a knock that saw him withdrawn before half time against Oxford. Josh Key will hope to return from illness, while teenager Ed James made his league debut in coming on for Sweeney and will be likely to start on Tuesday. One bright spot was the return to the bench of Tim Dieng, and he may be in contention to start as he looks to regain fitness. Elsewhere it was a red letter day for Sonny Cox who notched his first senior goal to reduce the deficit against 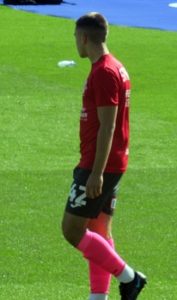 Oxford, and that will hopefully give him confidence as he presumably starts on Tuesday.

Forest Green have found the step up quite difficult, with 31 goals shipped in 14 matches seeing the vegans currently in the relegation zone – epitomised by their letting slip a two-goal lead to draw 2-2 at Port Vale on Saturday. However, the EFL Trophy has provided welcome respite with Forest Green already all but through to the knockout stages after wins over Newport and Southampton’s youngsters. The mathematics will be tricky should City win this tie and Newport defeat Southampton as all three sides would be on six points following Newport’s win over City back at the end of August. Ian Burchnall, who has come under pressure from supporters following his move from Notts County in the summer, will therefore likely field a relatively strong side, which could mean another match against his former club for Jordan Moore-Taylor, but striker Connor Wickham, who is coming into some form and has five goals to his name so far, will be unlikely to feature. Jamille Matt, on the other hand, came off the bench against Port Vale and the giant striker may feature as he looks to build his fitness.

While City will be hoping for a repeat of the televised 4-0 thrashing a couple of weeks ago, the sides have met once in this competition before – in the 20/21 season at the Park, where City emerged victorious 3-2. Matt Stevens opened the scoring for the visitors before Nicky Ajose equalised on the stroke of half time. Stevens restored the lead shortly after the break, but Matt Jay and Josh Key struck to give City the win.