After the weekend hiatus for the Football community to pay its respects to Her Majesty the Queen, City are back in action on Tuesday night. The postponement of the Charlton match will have given Matt Taylor’s side a few days extra to shake off any 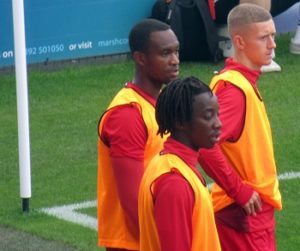 knocks, particularly the defensive duo of Alex Hartridge and Sam Stubbs, but Tim Dieng is unlikely to be back in contention just yet meaning one of Matt Jay, Jay Stansfield or Rekeem Harper will be likely to deputise.

On the face of it Shrewsbury, considered one of the teams likely to struggle, didn’t have a particularly busy summer – but Steve Cotterill (thankfully now fully recovered from his serious bout of Covid) made three loan signings on deadline day including Carl Winchester from Sunderland. Results have so far been mixed, with the Shrews sitting in mid table having won two, drawn three and lost two, their last result a 2-0 win at Forest Green. Goals have so far been an issue, with nobody yet scoring more than once in the league. One of the five players on one goal will be particularly keen to feature on Tuesday night – while City were due to face former striker Jayden Stockley on Saturday, on Tuesday they are likely to face his direct replacement, Ryan Bowman, who had a fine spell at City before departing for Shrewsbury in the summer of 2021. Bowman has not been without his issues, most notably a heart complaint that saw him rushed to hospital last season and necessitated corrective surgery in the summer – fortunately all seems to have worked out well and he is back firing again.

The sides last met in Shrewsbury’s 2014/15 promotion campaign, and City will not want a repeat of the scoring the last time they visited, when the Shrews romped to a 4-0 win with goals from Akpa Akpro (2), Collins and Barnett. The reverse fixture at the Park again saw Shrewsbury race into a 2-0 lead (both from Collins) by half time, but Nichols (2) and Wheeler sealed a comeback win. As a result the sides are level in league head to heads with 17 wins apiece, 14 matches finishing level.