City’s great start to the season appears to be grinding to a bit of a halt with a much-changed side going down 2-1 to League Two foes Newport in the EFL Trophy on Tuesday night meaning it’s now four games without a win since the 3-1 victory over Wycombe. Matt Taylor will be keen to reintroduce the “a team” for the visit of a much-fancied opponent, although he faces a difficult balancing act especially in attack, while he has again stated his aim of bringing in at least one new face by the end of Thursday’s 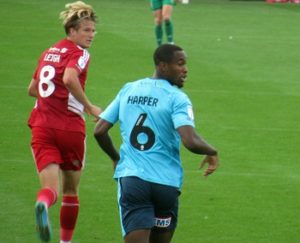 deadline day. On the signings front loanees Kegs Chauke and Rekeem Harper featured against Newport, with the former scoring his first goal in City colours. Sam Nombe in particular will be looking to have a say against his former club.

Having overcome the loss of their manager last season, MK Dons came very close to promotion to the second tier before ultimately missing out in the playoffs. Liam Manning’s second season in charge has seen a stuttering start with three straight league defeats to start the campaign, but wins over Port Vale and Morecambe and a draw with Accrington have given the Dons fresh impetus. They too, however, suffered defeat in the EFL Trophy on Tuesday night going down 2-1 to Cheltenham, but they are in the third round of the EFL Cup after an impressive win over Watford. The summer transfer business has on paper looked impressive, with Will Grigg and Bradley Johnson amongst their signings, while highly rated Louie Barry, who played against City for Swindon last season, has joined on loan from Aston Villa. They did, however, lose Scott Twine to Burnley, which will have come as a massive blow. Dean Lewington, 38, continues to be an automatic selection having made nearly 800 league appearances dating back to before the controversial move to Milton Keynes when he made 29 appearances for their previous incarnation as Wimbledon.

The last time MK Dons visited the Park there was an extra special air to proceedings as it marked the first visit back for City’s long-serving manager Paul Tisdale. With manager and fans not on the best of terms at the time of his leaving (despite having guided City to successive playoff finals), there was real needle as City ran out 3-1 winners. City led 2-0 at the break through Nicky Law and Jake Taylor, Joe Walsh pulled one back immediately after half time but Law again scored to seal the points. The reverse had finished 1-0 to eventually promoted MK Dons, Kieran Agard scoring from the spot against 10-man City, for whom Dean Moxey had earlier been sent off. That win at the Park in 2019 was the first City victory in this fixture, MK Dons having recorded five wins while two matches have finished level in league encounters.