City’s encouraging start to the season continued on Tuesday night with a 3-1 win over fancied Wycombe, the embryonic league table making good reading for Matt Taylor’s side with City currently nestled in the playoff places and the current leading scorers in English Football. There was one change made to City’s line-up on Tuesday with skipper Matt Jay coming in for Sam Nombe, 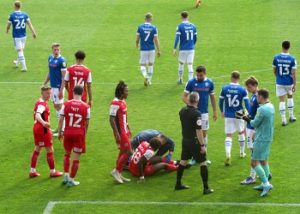 and with Taylor using just two substitutes against Wycombe there may be scope for further changes on Saturday with the schedule continuing to look hectic. This may mean a start for the likes of Jake Caprice and Josh Coley, while Nombe would hope to get a start too. Taylor remains hopeful of making a signing or two ahead of the weekend.

It’s fair to say that Cheltenham will be out for revenge on Saturday, while the vultures circle around rookie boss Wade Elliott, who replaced Barnsley-bound Michael Duff in the summer. The rot at least stopped on Tuesday night with a 0-0 draw at Fleetwood, but a failure to score since going 2-0 up on the opening day against Peterborough will be a worry even if the defence appears to be less porous than it was last week in the EFL Cup. Elliott has made a signing since that debacle, young forward Christian Norton joining from Stoke, although he has yet to feature beyond a cameo off the bench last Saturday in the Robins’ 2-0 defeat to Portsmouth. Elsewhere expect the first XI to be very different to that which took the field against City last week – Elliott made eight changes that night and expect most of those eight, including the likes of Alfie May and ex-City midfielder Liam Sercombe – to start.

That record-breaking 7-0 win will be fresh in the mind, but so too will be the last time Cheltenham made the trip down the M5 in the league, as a 90th minute Andy Williams strike in March 2021 proved the difference as Cheltenham went up from League Two. The reverse fixture, played during the temporary lifting of crowd restrictions in front of 1,000 spectators, was a lively affair finishing 5-3 to the hosts. Archie Collins gave City an early lead which was cancelled out by Sercombe. May and Sercombe again scored to make it 3-1 at half time, Jay made it 3-2 then Williams restored the two goal cushion. Nicky Law scored in the 88th minute to set up a grandstand finish only for Will Boyle to put the result beyond doubt. Those wins stretched Cheltenham’s league head to head lead to 11-7, three matches finishing level.

The last time we saw Robert Lewis referee Exeter City was in the EFL Trophy match against Chelsea U21s which ended in a 1-1 draw. Prior to that game he took charge of the home game against Newport County in April 2021 which ended 0-0.