If the 4-0 win over Port Vale made the pundits who confidently predicted relegation sit up and take notice, Tuesday’s night’s record-breaking win at Cheltenham in the EFL Cup may have made them scribble out their notes entirely. The 7-0 destruction of the Robins was the first time City had scored seven goals away from home, indeed the first in any competitive fixture since a 7-1 win against Barrow over 50 years ago. The win will have given Matt Taylor a few headaches, however – how do you drop players from a side that has just won 7-0? It is expected, though, that Taylor will revert essentially to the side that put Port Vale to the sword as City seek revenge for last season’s FA Cup heartache at Cambridge. 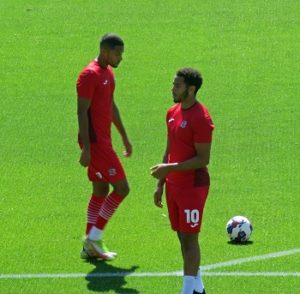 Cambridge are a side that was also expected to struggle last season following promotion but who confounded the critics to finish comfortably in mid-table. Tipped by many to struggle again, the Us started with 1-0 wins over fancied MK Dons and Championship side Millwall in the EFL Cup before going down by the same scoreline at Oxford on Saturday. Wes Hoolahan, who was instrumental in their promotion from League Two in 2021, has now left the club but otherwise the names will be largely familiar – names to watch include Harvey Knibbs, Sam Smith and Harrison Dunk.

Although the sides were a division apart last season they did meet as, for the second time since Matt Taylor was appointed, they were drawn together at the Abbey Stadium in the FA Cup. Unlike in 2020, however, it was Cambridge who came out on top 2-1 albeit in controversial circumstances. Sam Nombe put City ahead from the spot before Adam May equalised. In the dying minutes Knibbs scored, but the linesman had raised his flag to signify a player in an offside position from the cross that led to the goal. The referee overruled the linesman and allowed the goal, only for City to receive an apology from the FA following the match for the referee’s error. Cambridge went to Newcastle in the third round (and won).

As far as league fixtures are concerned – while Cambridge went on to gain promotion from League Two in 2021, City had their measure with two wins. The corresponding fixture ended 4-1 to City – goals from Bowman and Sparkes gave City a 2-0 lead at half time, Ironside reduced the arrears before Collins and Jay sealed an emphatic win. The home match had finished 2-0 with first half goals from Jay (pen) and Randall. Those wins closed the league head to head gap to 24-23 in Cambridge’s favour, 11 matches finishing level.