If City miss out on promotion this season, they will look back on too many matches that finished 0-0 where they were unable to break down a resolute opponent – as happened on Saturday against Salford. There is an immediate opportunity to make amends, however, with a third home game in a week taking place on Tuesday night. Matt Taylor will be forced to shuffle his pack again as his pair of Sams – Stubbs and Nombe – are set to miss the match with knocks picked up on Saturday. Fortunately Cheick Diabate has recovered from the injury he sustained at Bristol Rovers while Alex Hartridge completed 90 minutes unscathed against Salford, while Kieran Phillips and Offrande Zanzala will be competing to replace Nombe. Taylor has hinted at freshening things up elsewhere, which could mean recalls for the likes of Kyle Taylor and Jake Caprice. 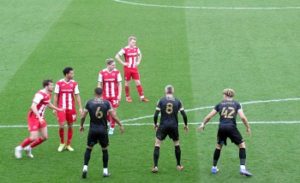 That Crawley are going into the closing stages of the season firmly in mid table is credit to the club and their colourful manager John Yems. The former City assistant boss has to make do with limited resources that usually see them tipped to be in a relegation dogfight at this time of the year, but there is no danger of that happening. That said, recent form hasn’t been too good, with two draws (against struggling Oldham and Scunthorpe) and two defeats in their last four since inflicting a surprise defeat on leaders Forest Green at the end of February. Much will depend on their more experienced players, such as veteran keeper Glenn Morris who, at 38, is still a mainstay in the Crawley line-up after nearly 250 league appearances. Former City striker Tom Nichols is joint top league scorer with Kwesi Appiah, both scoring eight times in the league.

It was very much a “game of two halves” in the reverse fixture. Crawley deserved their 1-0 lead through Appiah, but a second yellow card for Ashley Nadesan for “simulation” on the stroke of half time gave City fresh impetus, Matt Jay’s screamer immediately after the break followed by close range strikes from Atangana and Nombe sealed a 3-1 win. Crawley similarly felt hard done by at the Park last season – again leading 1-0 through Max Watters before Jake Taylor and a fortuitous effort from Ryan Bowman led to another comeback victory. City have a healthy league head to head lead with 11 victories to Crawley’s four, six matches finishing level.

Just the two games for Banjamin Speedie in charge of Exeter, see https://www.grecians.co.uk/wordpress/?s=speedie