City again found themselves with a weekend off, this time thanks to Storm Eunice, and this enforced break will have provided a boost to Matt Taylor, who pointed to a number of his players being either injured or in the “red zone” after the dramatic win over Harrogate. In addition, while Sam Stubbs may be missing following his shoulder injury against Harrogate, Taylor will have been boosted by Alex Hartridge playing a full 90 in the 2-0 win for the U23s against Wolves on Tuesday. Hartridge could therefore come 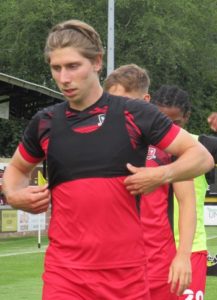 into contention, while Kieran Phillips could also be in line to return albeit likely from the bench as Sam Nombe will probably start. Further good news is that Offrande Zanzala’s operation was a success and he is back in training, but a return to action is still a while off yet.

Bristol Rovers have not had the luxury of a break in February, having played every Saturday and Tuesday during the month. However, Joey Barton’s Gasheads are in fine form and now in contention for a late run to the playoffs having lost just once – at Oldham – in 2022 so far. Since that defeat Rovers have recorded four clean sheets and three successive wins culminating in a 2-0 victory at Leyton Orient on Tuesday night that cost Kenny Jackett his job. Aaron Collins is now in double figures in all competitions, while loanee Elliot Anderson has earned rave reviews since moving from Newcastle in the January window. Former City trainee Cameron Hargreaves won’t be taking the field as he moved on loan to Kings Lynn Town in January.

If the two previous meetings between the sides this season ended at half time, City would win 9-0, but if only the second half counted it would be 4-0 to Rovers. The league encounter back in August saw City race into a 4-0 lead through Jay (2), Dieng and Kite, Finley reducing the deficit after the break. The EFL Trophy match was even more dramatic, City leading 5-0 at half time through Coley (2), Dieng and Amond (2) before a nervy finish after goals from Westbrooke, Jones and Anderton. That league win levelled up the league head to head with 26 wins apiece, 27 matches finishing level.

Four games for Petere Wright in charge of Exeter, details at https://www.grecians.co.uk/wordpress/?s=peter+wright