For the second successive Saturday City edged past a struggling club at home, going 2-0 up only to be pegged back to 2-1 late on, but that victory meant the unbeaten run is extended to 20 (officially still 19) and, thanks to City’s rivals down the A38 losing at Charlton, meant Matt Taylor’s side can now add the longest unbeaten league run to the overall lead. That replay against Bradford has added to the fixture congestion, meaning Taylor is likely to make a few changes for the long trip east to Colchester on Tuesday night. Taylor used a back four against Carlisle, but is likely to go back to the 3-5-2 on Tuesday night meaning likely starts for the likes of Jake Caprice and either Harry Kite or Nigel Atangana. 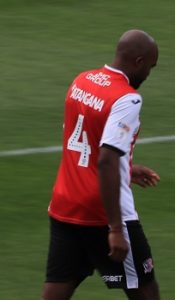 Having narrowly avoided relegation last season, Colchester made sweeping changes to their squad in the close season, basically if you had Ipswich on your CV you were signed. However, under the stewardship of Hayden Mullins, things haven’t really improved and, following a 1-0 defeat at fellow strugglers Stevenage on Saturday, the Us are currently 20th. That defeat came at a price with goalkeeper Shamal George limping off having conceded the penalty that lost them the match – if he fails to recover then Jake Turner is likely to deputise. Elsewhere if Freddie Sears (five league goals) fails to hit the net then they’re struggling, the rest of the squad having mustered six between them.

City took the points in this fixture last season – the corresponding match finished 2-1 as City went 2-0 up through Robbie Willmott and Ben Seymour’s first league goal before Aramide Oteh reduced the arrears. That was a vast improvement for Colchester on the match at the Park, where the 6-1 scoreline was if anything flattering to the visitors – City’s goals from Jay (2), Randall and a Ryan Bowman hat-trick, Folivi scoring for Colchester. Those wins extended City’s league head to head lead to 31-25, 22 matches finishing level. Details of the last 30 games can be found at https://www.grecians.co.uk/wordpress/?p=9529