City fought back with 10 men to draw at Harrogate last Saturday and, fresh from no game in midweek, Matt Taylor’s side are back in action against the side currently sitting atop the division. The centre of midfield has looked a touch light this season in any case and the red card dished out to Harry Kite, in addition to the injuries to Archie Collins and Nigel Atangana, saw Taylor drop into the deadline day transfer market to sign namesake Kyle Taylor from Bournemouth – and continue the tradition of City having a player called Taylor (or a derivative) every season since 2003. He is likely to start on Saturday where he will be in familiar company in the middle of the park, as he spent last season on loan at 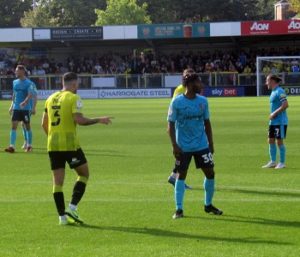 Southend where he played alongside Timothee Dieng. Elsewhere Sam Nombe is coming back to full fitness so will be pushing for a start although to accommodate him may mean City move towards a back four.

It was a busy summer for Forest Green, albeit more so off the pitch as Rob Edwards (not the City legend) was appointed as manager. Some key players such as Aaron Collins and Carl Winchester departed, but Matt Stevens appears to have been revitalised from his loan spell at Stevenage last season and has begun the campaign like a train with five goals alongside Jamille Matt (four) and Nicky Cadden (three). Edwards enjoyed a strong start to his tenure with four league wins and a penalty shootout victory over Bristol City in the EFL Cup, but things haven’t been so good in the last week or so – a 3-1 defeat to Premier League new boys Brentford in the EFL Cup, a 2-0 home reverse to Port Vale and, on Tuesday night, a defeat on penalties to Northampton in the EFL Trophy. Edwards will therefore be keen to get back on track on Saturday, while it will be a homecoming for Jordan Moore-Taylor and a return for former loanee Kane Wilson.

The sides met three times last season, with both league matches finishing level and City triumphing 3-2 in the EFL Trophy. The corresponding fixture, on Boxing Day, finished 1-1, both goals scored by A Collins – Aaron opening the scoring for the visitors before a stunner from Archie levelled things. When the sides met in April, the result, like most of City’s matches late on in the season, was 0-0. As a result draws pulled level with City wins in league fixtures with eight, while Forest Green have won just two. Details of our encounters can be found at https://www.grecians.co.uk/wordpress/?p=9840