Exeter City’s Will Dean has joined National League South side Truro City on a permanent deal. Will was released by the Grecians at the end of the 2020/21 campaign. The 20 year old academy graduate played twice for Exeter in League 2 last season, he had gone on loan to Bath City but their season was curtailed so him opportunities were limited to seven league 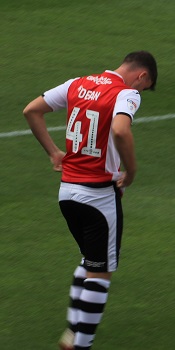 and cup games. Will made his EFL début away at Salford in September.

Will Dean had played for Truro City in the 2019/20 season moving to Truro on a six month loan.

To go after Will was a no brainer. I’ve wanted to sign him since the day he went back to Exeter from the loan he had with us.

He’s a player I rate really highly. He’s a really good human being as well as mature. He works hard, he’s diligent, he’s from a good family and he’s really polite. He’s exactly the right kind of character we want at the football club.

We’re thrilled to have him, it’s been a really long process, I’ve had to be very patient, but we’ve got there in the end. I’m glad its all done nice and early as well. He’s settled in his mind now and he’s looking forward to playing football because he hasn’t played in a long time because of Covid. He’s someone we rate highly and have a lot of respect for.

Will Dean talking to Truro City FC said of his move

I’m really happy to be back. Paul has shown a lot of interest in me as soon as he found out I wasn’t staying at Exeter and obviously having had a successful time there before, I think it’s the best place for me to come and play again.

Will had received offers from other clubs from higher divisions but Will turned those down for an opportunity to be part of the project here at Truro City.

The way the Gaffer sort of laid out the future sold it for me. The clubs going in the right direction and I’m here and ready to help in that.

Will Dean’s player stats cam be found at https://www.grecians.co.uk/wordpress/?sp_player=will-dean