Jake Taylor has confirmed that he’ll not be taking up the offer of a new contract with Exeter City and is looking to move with his family back home. 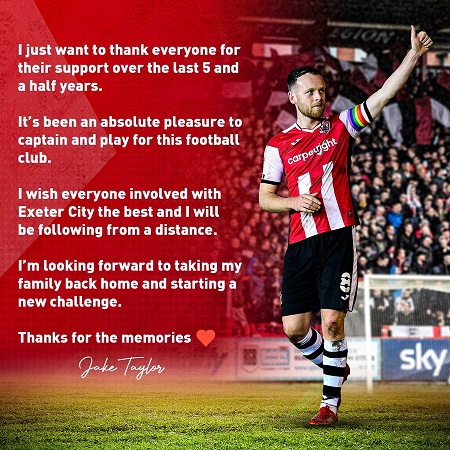 Jake Taylor originally came on loan from Readinginitially on a one-month loan deal in September 2011, the Wales Under-21 midfielder stayed for the rest of the season making 30 appearances. He came back on a permanent move in January 2016. The manager in August 2018, Paul Tisdale, made Jake the captain. A role that Jake has relished.

In his time with the Grecians Jake Taylor has made 293 appearances and scored 32 goals. In his time he gave his all as a Grecian, and goes with the goodwill of Exeter City fans. Good luck Jake.