City will have seen the Walsall match on Tuesday as a missed opportunity – they dominated the match, had the ball in the net once before it was rightly disallowed, and Matt Taylor suggested there might have been a penalty shout – but a 0-0 draw means Taylor’s side are in danger of losing ground on the teams at the top, especially with the likes of Bolton, Tranmere and Bradford motoring. Two successive matches without a goal means the return of Ryan Bowman from suspension can’t come too soon, and his return will add a bit of physical presence to the line-up. Ben Seymour may drop to the bench unless Taylor reverts to the wing-back formation which could facilitate both Seymour and Matt Jay, 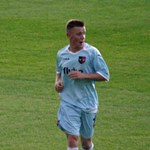 although this would also denude the creative spark from the flanks with Randall and Willmott likely to make way. Taylor’s options at the back are reduced in any case with Parkes (suspended) and Sweeney (injured) missing, which may force his hand in terms of sticking to a back four.

Having threatened to break into the packed promotion race, a spell of poor form led to the sacking of Ross Embleton after last week’s 3-1 home reverse against Tranmere. Jobi McAnuff has been placed in temporary charge, and his first match was a 1-0 win at relegation-threatened Grimsby on Tuesday night. With the Os safely ensconsed in mid-table McAnuff’s role will no doubt be in stabilising the club’s on-field fortunes ahead of the summer. Embleton had been quite busy during the January window, bringing in the likes of former City loanee Tristan Abrahams back to the club on loan from Newport, although Jordan Maguire-Drew left on loan for Crawley and was so impressive in last week’s win over City. Only two players have more than two league goals this season – Danny Johnson has been talismanic with 14 while Connor Wilkinson has seven. Abrahams has been featuring mainly from the bench.

It was Wilkinson who scored the opener in the reverse fixture at Brisbane Road in October, but Jake Taylor’s equaliser early in the second half ensured a share of the spoils. Last season’s only fixture between the sides also finished level – Sweeney put City ahead but the Os led 2-1 through Angol and Dennis before Nicky Law held his nerve deep into injury time from the spot to seal a point. City’s unbeaten run against Leyton Orient is now at seven matches dating back to the 2011/12 season, but the league head to head lead is still just in favour of the East Londoners, 32 wins to 31, 25 matches finishing level.  The last 34 games can be viewed at https://www.grecians.co.uk/wordpress/?p=10267

Charles Breakspear has refereed us 15 times, details at https://www.grecians.co.uk/wordpress/?s=breakspear