A 1-1 draw away to a side desperately short of form may not usually be described as “heroic”, but given City had to play from the 9th minute with ten men then were down to nine for the entire second half thanks to the first and second red cards of the season coming in the same match, heroic was the right word to describe a performance that saw City come within a couple of minutes of securing a win. Matt Taylor will have some serious thinking to do about his side for the visit of the bottom club on Saturday as, in addition to the 9-man performance sapping their strength, the bog of a pitch at Newport will also have been heavy on the legs. The paucity of defensive options may mean City revert to a back four, otherwise unless either McArdle or Stubbs return, Will Dean could come back into the side after his loan spell at Bath. Up front Ben Seymour is likely to continue, while Bowman’s three match absence could open the door for Alex Fisher to press his claims for a regular place. 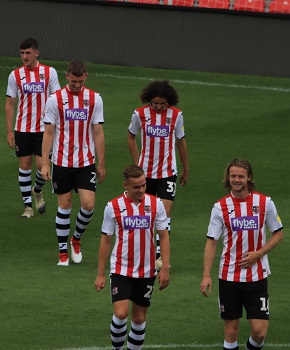 Grimsby’s slide to the foot of the table has had an air of inevitability about it. Concern over off-field events surrounding a possible takeover attracted at first strident criticism by Ian Holloway, then his departure. Former boss Paul Hurst, who oversaw their return to the Football League in his previous spell in charge, was brought back under this perilous backdrop, but his record of one draw and five defeats so far suggests he has been unable to stem the tide. Hurst has been backed to enter the loan market, with no fewer than six players coming in under this system. Goals have been a major issue, with the Mariners failing to score more than once in a match since late November. As a result, their top league scorer is a defender, Matthew Pollock (an apt name for a fishing town club), with just three. A tell-tale sign of a side in trouble is a large number of players used, and with 42 players featuring in league action so far, this is personified with Grimsby.

City were in great form when they visited Cleethorpes at the start of December, and the 4-1 win was perhaps not a surprise. Bowman gave City the lead, Hendrie equalised for the hosts, before Williams with a brace and Jay sealed the win. Grimsby will take heart from the fact that they have recorded successive wins at the Park, last season being the only team to visit City in the league and leave with all three points following a 3-1 win. Robson scored a brace, a penalty from Ogbu made it 3-0 before Bowman’s consolation in the 90th minute. Grimsby maintain the slight edge in league head to heads with 13 wins to City’s 12, eight matches finishing level. The last 14 games cen be found listed at https://www.grecians.co.uk/wordpress/?p=9832

David Rock has taken charge of two Exeter games, details can be found at https://www.grecians.co.uk/wordpress/?s=rock