City’s hopes of making it three successive wins were scuppered on Tuesday with the late postponement of the Barrow match, at least it wasn’t a long trip for nothing…and City will be hoping the weather has improved enough by the weekend ahead of another long trip, as revenge will be on the cards for Matt Taylor’s side. The enforced break may have helped with those carrying knocks, such as Rory McArdle and Lewis Page, although with the Saturday-Tuesday grind continuing apace Taylor will continue to rotate his squad carefully to guard against fatigue.

The appointment of Harry Kewell as manager in the summer raised a few eyebrows given his modest record in previous roles, but any thoughts that the Latics would be involved in the relegation dogfight have been put to one side although 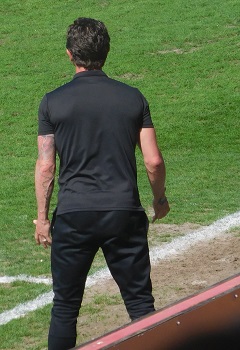 Kewell’s side isn’t threatening to trouble the scorers at the other end of the table either. City will look to exploit Oldham’s poor home form which has seen them lose on nine occasions, as well as their defensive frailties – Oldham have kept just one clean sheet in the league all season, ironically against the side (Grimsby) who along with them have the joint worst defensive record. One key signing during the January window was Nicky Adams, who has been a creative force at this level for several years, although striker Danny Rowe departed for Bradford. That will have put more pressure on top scorer Conor McAleny, who has 14 goals across all competitions so far.

It was Rowe with a free kick from somewhere near Crediton that sealed a shock 2-1 win for Oldham in the reverse fixture in November. City had led through Randell Williams before another stunning goal from George Blackwood levelled the scores before Rowe’s intervention, which bore more than a resemblance to Jonny Metgod’s iron foot for Nottingham Forest back in the day. Last season’s encounter at Boundary Park won’t live long in the memory as it finished 0-0. City have the league head-to-head lead with 13 wins to Oldham’s nine, seven matches finishing level. Details of the last 13 games can be found at https://www.grecians.co.uk/wordpress/?p=10043