City must wish they could play Stevenage every week, as both of their victories in 2021 have come against the otherwise in-form strugglers. Tuesday night’s 1-0 win was a real shot in the arm for Matt Taylor’s side during a brutal schedule of five away matches out of six, ahead of that solitary home fixture against another side looking over their shoulder. Rory McArdle returned to the starting XI and celebrated with the winning goal and a major part of a solid defensive performance before limping off with an injury that makes your writer wince. Fortunately the injury was not as serious as it sounded at first although it may mean he misses Saturday’s match. Elsewhere new loan signing Robbie Willmott made his City debut off the bench, and his inclusion may depend on whether Taylor sticks to the 3-5-2 or switches back to a back four. 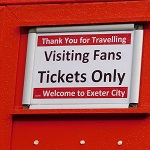 After missing out on the playoffs last season, Bradford were expected, under the returning Stuart McCall, to challenge near the top of the table this season, but instead it has been something of a struggle, culminating in McCall getting the bullet in December. Youth coaches Mark Trueman and Conor Sellars have been in interim charge, a decision that perhaps raised eyebrows given their lack of experience, but the Bantams have been unbeaten in all eight fixtures played under the young pair, including taking four points from leaders Cambridge. With games in hand over most other teams due to matches being called off, Bradford are starting to believe that if their form continues the 10 point gap to the playoffs is not insurmountable. Despite being able to call upon the likes of Lee Novak, Clayton Donaldson and Billy Clarke, goals were an issue, which led to the signing of Danny Rowe from Oldham. Rowe, a prolific scorer in non-league with AFC Fylde and who scored in Oldham’s 2-1 win at City earlier in the season, has hit the ground running in West Yorkshire with two goals in his three appearances. Novak is the leading scorer with seven in all competitions, but he hasn’t featured since the end of December.

Matt Taylor will be eager to get one over a club with whom he had a brief playing spell, but has yet to register a win against the Bantams in two visits to Valley Parade. The reverse fixture saw an entertaining 2-2 draw. Clarke gave Bradford the lead, City responded through Jay and Bowman before Staunton equalised on the stroke of half time. With last season’s match at the Park falling foul of the early curtailment of the regular season, the last time Bradford visited City was during their promotion campaign in 2012/13. City will hope for a repeat of that result, a 4-1 thrashing which, paradoxically, galvanised Bradford into a stunning run in that sealed their promotion. The sides are level in league head to heads with 15 wins apiece, 12 matches finishing level.

Ben Speedie has refereed just the one Exeter game, that at Walsall earlier in the season https://www.grecians.co.uk/wordpress/?sp_event=walsall-vs-exeter-city-4

Previous: Robbie Willmott comes in on loan
Next: Preview: Barrow vs Exeter City